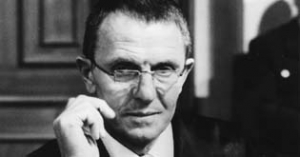 After dropping out of secondary school and abandoning his apprenticeship as a locksmith, Heinz Bennent became a member of the Air Force ground staff in 1940. After the war, he took acting classes in Göttingen.

From 1947 until 1963, he worked at theaters in Karlsruhe, Bochum, Basel, Bonn, Hannover, and Hamburg. From 1954, he also starred in many TV productions. In 1960/61, he played the devil in "Der Teufel ist los" (Peter Hamel), based on Grabbe's play "Scherz, Satire, Ironie und tiefere Bedeutung". He also starred as K. in Sylvain Dhomme's movie adaptation of Kafka's novel "Das Schloss" ("The Castle"), and as Fritz Tritz in "Der Nebbich" (Peter Zadek). Furthermore, Bennent repeatedly worked with Hans W. Geissendörfer: In "Eine Rose für Japan" he played a professional killer, and in "Perahim – die zweite Chance" he portrayed an ex-convict.

In the early 1970s, he relocated to Switzerland. In 1975/76, he accepted the leading role in the TV series "Der Anwalt" (Heinz Schirk). After playing his first movie leading role in Christian Rischert's "Kopfstand, Madame" (1966), ten years passed before Bennent could be seen in his next big movie role: In Ingmar Bergman"s "The Serpent's Egg" he played Dr. Hans Vergerus.

In Samuel Beckett's one-man play "He, Joe", which was directed by the author himself, as well as in Truffaut's "Le Dernier Metro", in which he played a Jewish theater director, Bennent portrayed people in conflict with themselves. Furthermore, he often played failing characters such as the district attorney Dr. Andergast in "Der Fall Maurizius" (Theodor Kotulla), and professor Kremer in Claude Goretta's "Der Tod des Mario Ricci" ("La Mort de Mario Ricci"). In Geissendörfer's "Die Eltern“, he co-starred alongside his wife Diane Mansart and his children Anne and David.

He also played supporting roles in movies with which his children became famous: Alongside Anne he starred in Geissendörfer's "Die Wildente", and alongside David he could be seen in Volker Schlöndorff's "Die Blechtrommel" ("The Tin Drum"). Since the early 1980s, Bennent has predominantly starred in French productions. In 2000, he was celebrated for his portrayal of the old philanderer Hugo in the movie adaptation of Ingrid Noll's crime thriller "Kalt ist der Abendhauch" ("Cold Is the Breath of Evening"). The young Hugo was played by August Diehl. In 1998, Georg Stefan Troller portrayed the family of artists in his TV documentary "Benennt mal vier".

During the 1960s and the 1970s, Bennent took to the stage for several guest performances. From 1976, he appeared at the Munich Kammerspiele, the Berlin Schlossparktheater, and the Residenztheater in Munich. In February 1995, he starred in his first French-language theater production: Alongside his son David he played Hamm in Beckett's "Fin de partie" at the Théâtre de Vidy in Lausanne. Subsequently, he went on a theater tour with over a hundred performances.