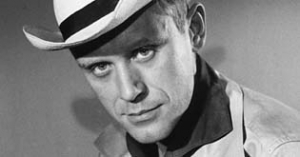 Horst Bernhard Wilhelm Frank was born in Lübeck on May 28, 1929. After graduation, he completed an apprenticeship as a trader before enrolling in the acting class at the Music Academy in Hamburg. After his final exam in 1951, he played theatre in Bonn, Basel, Wuppertal and Baden-Baden, where he became a member of the Südwestfunk ensemble and started working for televions.

In 1956/57, he gave his screen debüt as a cynical coward in the war film "Der Stern von Afrika". From 1959 on, he also appeared in international productions, namely from Italy and France ("Tu ne tueras point"). He married the actress Chariklia Baxevanos in 1960, and between 1961 and 1963, he raised coffee and vegetables in Tanganjika (Tansania).


While in the early years of his career, Frank often played sensitive loners ("Das Mädchen Rosemarie"; "Haie und kleine Fische") and neurotic characters ("Der Greifer"), from the 1960s on, he was mostly typecast as the bad guy in numerous adventure and action films, including several German and Italian westerns ("Preparati la bara!"). In the 1980s an early 199os, Frank was a fixture in German crime TV-series, sticking to his popular gangster persona.

Playing the literal devil in the children programme "Timm Thaler" added new layers to this image, while "Das Traumhaus" for the first time showcased Frank as a positive father figure. From 1973 on, Frank frequently worked in the theatre, touring with his own productions of plays by Noel Coward and Peter Ustinov. In 1992, he performed in Peter Zadek"s memorable staging of "Der blaue Engel" in Hamburg and Berlin.

Frank published his autobiography in 1981, followed by a first volume of poems in 1989. He recorded a record for children as well as a collection of chansons. Frank, who had two children, married the actress Brigitte Kollecker in 1979. Following a heart attack, Horst Frank passed away in Heidelberg on May 25 1999.