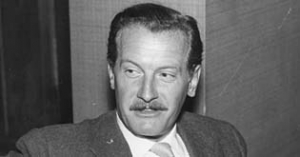 Karl Ludwig Joseph Maria Schönböck, born February 4, 1909, in Vienna, already performed on stage with an amateur theatre group while he still went to school but then seemed to go on with a career as a successful athlete in the disciplines of boxing and fencing. But after briefly studying philosophy from 1927 to 1930, he enrolled at Vienna’s Akademie für Musik und Darstellende Kunst and worked for the radio station "Ravag". In 1930, Schönböck made his stage debut at Meißen’s Stadttheater which marked the beginning of a more than 70-year long acting career.

After numerous stints at Austrian and German theatres, Schönböck made his debut on the movie screen in 1936 in Reinhold Schünzel’s film "Das Mädchen Irene" ("The Girl Irene"). At just 27 years old, he already played a graying British aristocrat in this melodrama – a role type that he increasingly specialized on during the following years. Thus, the tall Schönböck who always wore a meticulously trimmed moustache convincingly portrayed gallant bon vivants, aristocrats, and distinguished socialites in films such as "Daphne und der Diplomat" ("Daphne and the Diplomat", 1937), "Casanova heiratet" (1939/40), or "Titanic" (1942).

Schönböck’s stage career during the 1940s and 1950s was characterized by versatile performances: In 1947, he made his first appearance at Munich’s Kammerspiele, starred in numerous cabaret programs, and performed at Munich’s legendary revue theatre "Die Schaubühne". Furthermore, he was a founding member of the cabaret show "Die kleine Freiheit". Besides, Schönböck performed at theatres in Stuttgart, Vienna, and Berlin, mainly in productions of sophisticated boulevard theatre plays, for instance, of Noël Coward’s play "Private Lives" or of Somerset Maugham’s play "Lady Frederick".

In his numerous film and TV appearances, however, Schönböck stayed true to his well-established "special field" of the nonchalant grand seigneur and the suave gentleman, for instance, in Franz Antel’s film "Der Kongreß tanzt" ("Congress Dances", 1955) or in Helmut Käutner’s film "Der Traum von Lieschen Müller" ("The Dream of Lieschen Mueller", 1961). From the 1970s on, Schönböck was mainly seen on TV. In his occasional appearances on the movie screen in films like "Otto – Der Film" (1985) or "Schtonk", Schönböck played caricaturing variations of his earlier roles as aristocratic and upper-class characters in a self-mocking way. In 2000, Schönböck starred in one of his last roles in an episode of the TV series "Schlosshotel Orth" with the peculiar title "Der Vorhang fällt" ("The curtain closes"). Shortly after, on March 24, 2001, Karl Schönböck died in Munich.