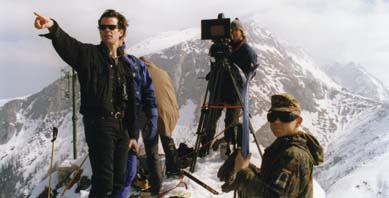 ”1994 marked an absolute low in German cinema both in respect to content as well as market share,” Wolfgang Becker remembers, “and so some Berlin filmmakers got together regularly to meet and discuss the situation – which was at times partly constructive, partly disheartening. It was also a period of squandering which culminated with the founding of X-Filme.” Two years earlier, Stefan Arndt and Tom Tykwer founded the production company Liebesfilm for the making of Tykwer's debut "Die tödliche Maria."Both of them, along with Becker and Dani Levy, had already ventured to merge both creative and financial sides. Already by December 1994, shooting began for the first X-Film, Dani Levy's "Stille Nacht" ("Silent Night", 1996). Shortly after it was finished, the X-Family was extended to include the producer Maria Köpf.

Cinema as a Construction Site 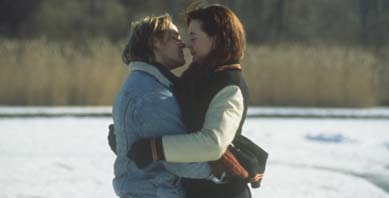 “We haven't followed the wave of German comedies nor done remakes of German films. We look for authentic material, which either takes place in Germany or has something to do with Germany, but still functions internationally,” comments Stefan Arndt. In 1997, X-Filme delivers an early example of its ambitious company philosophy with Wolfgang Becker's "Das Leben ist eine Baustelle" ("Life Is All You Get", 1997). Achieving critical acclaim both
nationally and internationally, this tragi-comic big city ballad with Jürgen Vogel and Christiane Paul is well received by movie-goers, showing that they are ready for new, unconventional film stories. Overwhelming evidence for this was provided by another X-film, which went into production in 1997, and whose success would change the German film landscape: "Lola rennt."

Lola runs around the World 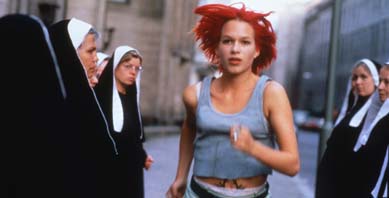 After his suggestive and stark melodrama "Winterschläfer" ("Wintersleepers", 1997), Tom Tykwer wanted to do a movie which would fully play out film's creative means. For this purpose, he invented the story of the red-haired Lola, played by Franka Potente, whose dramatic run through reunified Berlin was nexpectedly celebrated by critics and movie-goers alike. With its electrifying verve, "Lola rennt" became an international phenomenon, overcoming the speech barriers and prejudice often associated with German cinema. Soon the award winning red-haired Lola was running around the world, as its worldwide distribution has impressively proven. In her icon-like role, Franka Potente rose to stardom while the door to Hollywood – and therefore the international market – became open to Tom Tykwer and X-Filme. 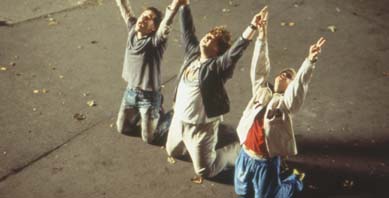 Despite its overwhelming success, the X-filmers remain champions of a modern, artistic as well as commercial Autorenkino. The company has since then supported new talents like Sebastian Schipper, whose considerably noticed début film "Absolute Giganten" ("Gigantic") premiered in 1999. The changing economic climate as well as the increased number of productions lead to the well publicized founding of its own distribution arm X-Verleih during the Berlinale in 2000. This was followed in September of the same year with Senator AG joining as shareholder. X-Filme increased its output and for the first time included outside productions in its distribution. This expansion, however, included risks, especially the cost-intensive productions "Der Krieger und die Kaiserin" ("The Princess and the Warrior", 2000) and "Heaven," whose positive public reception were not crowned by the same earlier commercial success. Also, the collapse of the German "New Market" Stock Exchange affected X-Filme Creative Pool as it did most film companies in Germany.

Out Of The Crisis with Lenin 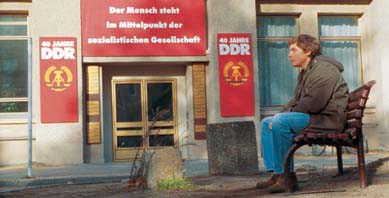 X-Filme began shooting "Good Bye, Lenin!" in December 2001. With Daniel Brühl and Katrin Saß - who had already achieved a noticeable comeback through the comparingly "small" X-production "Heidi M." - in the lead roles, film director Wolfgang Becker created a touchingly comic version of 79 square meters DDR, on which the recently defunct socialist Germany is briefly resurrected out of the ruins. Although the film was entered in the Berlin International Film Festival competition in 2003, no one expected the overwhelming success that "Good Bye, Lenin!" would ultimately achieve in Germany and abroad: with over 6.6 million admissions in Germany alone and countless awards for this German-German Arthouse-Blockbuster, X-Filme was again considered to be a highly prestigious brand like in the times of "Lola rennt". 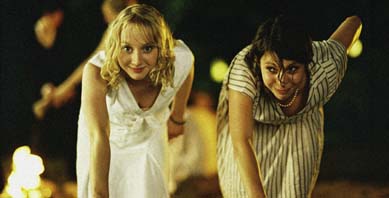 For X-Filme, the year 2004 began with the historic coming-of-age drama "Was nützt die Liebe in Gedanken" ("Love in Thoughts"). This was followed by a new film from Oskar Roehler – "Agnes und seine Brüder" ("Agnes and his brothers") –, the comedy "Alles auf Zucker!" ("Go For Zucker") by X-Filme co-founder Dani Levy, and Ayşe Polats acclaimed youth and migration drama "En Garde." Meanwhile, Sebastian Schipper is already working intensively on his second feature film for X-Filme. After ten years in the often rapidly changing film business world, the X-Family has come out the crisis even stronger, further establishing their vision of new German productions both nationally and internationally.