Film in the National-Socialist State 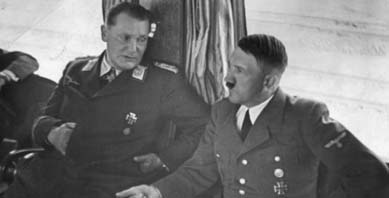 "We're here to stay!" was the Propaganda Minister Joseph Goebbels' prognosis for the Nazi regime. People were to expect "the National-Socialist movement [to] intervene in the economy and in general cultural affairs, and that includes film." Film was to take on "the contours of the Volk," and only art that "has taken root deep in the bedrock of National Socialism" was to be allowed. With these words, Goebbels pronounced to representatives of the film industry during a speech in the Hotel Kaiserhof in Berlin on March 28, 1933, the principal features of the Nazis' incipient film policy were laid out.

Goebbels' speech reflects the radical, antidemocratic transformation of this time—the end of the Weimar Republic. Two weeks earlier, on March 13, Goebbels was named Minister of Popular Enlightenment and Propaganda, Adolf Hitler having been installed as Reich Chancellor only six weeks prior. Four weeks before Goebbels' speech, on February 28, the Nazis had successfully pushed through a key legislative framework with their Reichstag Fire Decree. The Enabling Act of March 23, 1933 gave the government, the prerogative to pass laws without the approval of either house of Parliament. One after another, the Nazis made decisive steps towards their establishment of a totalitarian regime, one in which the medium of film would play a standout role. 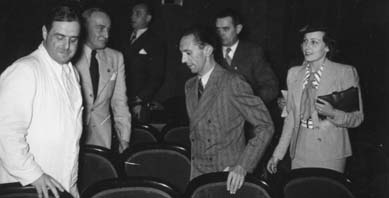 The goal of ethnic and racial "cleansing", as film historian Martin Loiperdinger has remarked, was well established long before the Nazis came to power. "Berlin's 'Film Jewry' above all was repeatedly threatened with destruction." This threat materialized as a real danger, however, during the Nazi regime. Pressure on Jewish filmmakers increased immediately; only a few — like Reinhold Schünzel, who as a so-called "Half-Jew" was allowed to work from 1933 to 1937 on a special permit — were tolerated; as filmmakers and earners of foreign capital they maintained the exportability of German film. As early as Spring 1933, Ufa, the largest German film company, laid off its Jewish employees "owing to Germany's national revolution." The Nazis' vision was for a German film industry excluding everyone considered a political enemy — and/or anyone fitting their anti-Semitic, racist, and nationalist profiling. Furthermore, as a state-run enterprise, the film industry was to be the tool of the National-Socialist leadership. To that effect, the Filmkreditbank, a special bank for the film industry, was established on June 1, 1933. After it was decreed on June 28, 1933 that everyone "involved in the production of a German film … be of German descent and hold German citizenship," the Reich Chamber of Film would invoke the "reliability clause" to further the so-called Aryanization of German film. Exile was the only way out. "More than 1,500 filmmakers — many of them Jewish or politically progressive — fled Germany," writes film historian Eric Rentschler, "and were replaced by toadying writers and second-class opportunists." Many of those who did not succeed in escaping were murdered by the Nazis: Kurt Gerron, Eugen Burg, Paul Morgan, and Otto Wallburg, to name but a handful. 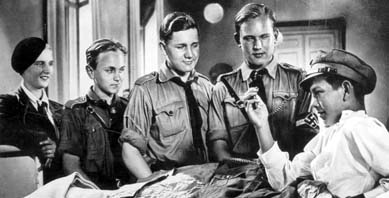 In their pursuit of total control over German film, the Nazis worked primarily by intervening in the film economy's corporative structure: reworking the Film Law, censorship and rating [Prädikatisierung] criteria, and by virtually dissolving the institution of film criticism. The latter was replaced in 1936 by the ideologically determined "film observation". The actual nationalization of the film industry was accomplished, albeit surreptitiously, by Reich Representative for the German Film Industry Max Winkler and the Cautio Trust, Ltd. German film companies were bought up one by one and brought under state control. Finally, on January 10, 1942, all film companies directly or indirectly owned by the state were combined into a single holding company, the Ufa-Film GmbH (UFI). Nevertheless, National-Socialist period film — like that of any historical period or national cinema — was never an entirely uniform and isolated corpus. The National-Socialists' usurpation of power in 1933 was no more a "zero hour" for German cinema than was the liberation from the Nazi dictatorship in 1945. Anti-Semitism was a social reality well before 1933, and not every film made during the Third Reich was equally propagandistic. Popular films and aggressive propaganda films were fraught in different ways with National-Socialist ideology, and even after 1933 there were occasional throwbacks to the more liberal film culture of the Weimar Republic. Such works include: Reinhold Schünzel's "Viktor und Viktoria" (Victor and Victoria, 1933), Oskar Fischinger's "Komposition in Blau" (Composition in Blue, 1935) and "Amphitryon—Aus den Wolken kommt das Glück" (Amphitryon, 1935) — in which Reinhold Schünzel has Hitler's personal bodyguards as ancient soldiers in sandals and miniskirts. These were contemporary with propaganda and agitation films such as "Hitlerjunge Quex" (Hitler Youth Quex, 1933), "SA-Mann Brand" (Storm Trooper Brand, 1933), Leni Riefenstahl's NSDAP rally documentary rendered apotheosis "Triumph des Willens" (Triumph of the Will, 1935), and "Ewiger Wald" (Enchanted Forest, 1936), commissioned by the National-Socialist Cultural Community. 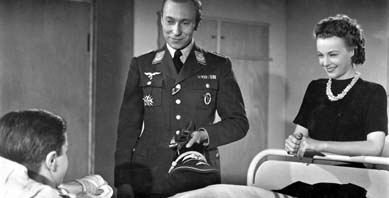 From the beginning, the Nazi leadership understood film as a medium of mass indoctrination. The self-styled "Patron of German Cinema," Joseph Goebbels, gave apparent preference to popular entertainment over aggressive propaganda films. This particular role of film took on additional significance following Germany's invasion of Poland in 1939, marking the beginning of World War II. According to Goebbels, it was "precisely in wartime" that film was to display "its educational benefits"; he also understood "entertainment" as "politically significant, and even decisive for the war effort." Consequently, agitating films such as documentary "Feldzug in Polen" (Campaign in Poland, 1940) or the anti-Semitic flash in the pan "Jud Süß" (Jew Süss, 1940) were produced alongside propagandistic popular films like "Wunschkonzert" (Wish Concert, 1940), and overweening feature film portraits of "great Germans", like "Friedrich Schiller" (1940) and "Carl Peters" (1941). In the midst of war and the mass-scale genocide in German death camps, the German film industry was running at full speed. As film historian Sabine Hake writes, "annual ticket sales shot from 624 million in 1939 to [1.1] billion in 1943. In the early 1940s, only the United States had more exhibition venues than Nazi Germany, which had nearly 8600 cinemas in Germany and the occupied countries and territories." 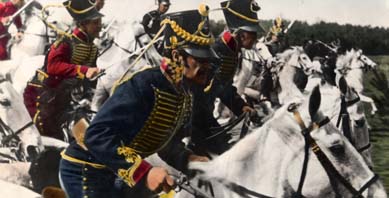 Film remained the principal medium of the National-Socialist state until the very end. As late as 1944/45, when civilian men between the ages of 16 and 60 were being drafted for the "People's Storm", entire army units were deployed as extras for one of the last Third Reich film productions, the expensive, color "holding-out film" [Durchhaltefilm] "Kolberg" (Burning Hearts), which premiered on January 30, 1945. For this reason, the issue of how to deal with the National-Socialist film legacy was of vital importance following the war's end and Nazi Germany's defeat only a few months later.

Without even counting documentaries, newsreels, kulturfilms and short films, the Third Reich bequeathed over 1,000 feature films to later generations. Only a small portion of them were considered to be genuine pieces of National-Socialist propaganda and were thus subject to intensive discussions or, due to their agitational content, were not released for public viewing by the military governments in conjunction with the film industry's institution of voluntary self-control [Freiwillige Selbstkontrolle or FSK]. Broadcast on television and distributed on video and dvd, large portions of National-Socialist film remain, even today, part of everyday German culture. This makes the challenge, and necessity, of coming to terms with these films from Nazi Germany even greater.