Dealing With the Legacy of National-Socialist Period Films

Between "Film Classics" and the Conditionally Banned Film 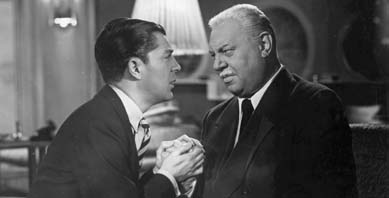 Decisive steps for the practical treatment of National-Socialist films were taken immediately following the war by the allied forces. The first measures were instituted soon after the German army's unconditional surrender on May 7 and 9, 1945. The "Military Government Law No. 191" of May 12, 1945 applied to "the control of print media, radio, news services, film, theater, and music and the prohibition of activities of the Reich Ministry for Popular Enlightenment and Propaganda" prohibited until further notice "the production and exhibition of moving pictures". With "Military Government Law No. 52" of July 14, 1945, the entire state-owned film inventory of UFI-Holding was confiscated. Film production, distribution, and exhibition were put under strict licensing regulations. For a film to be shown in any of the four occupation zones, it had first to undergo an initial censoring process by the news control agency of the corresponding military government.

In practice, significant differences in the execution of film policy soon emerged between the American, British, and French zones on the one hand and the Soviet Occupation Zone (SBZ) on the other. With the founding of the German Film Corporation (Deutsche Film AG or DEFA) in May 1946, the Soviet military government forced the hasty reconstruction of film industry structures under Soviet supervision. Even as the military governments of the western occupation zones demonstrated their awareness of film's educational function, their main goal was to prevent any accretion of power or possible monopoly in the German economy in general, and this clearly applied to the film industry as well. While production in the three western zones was thus hampered, the movie house business resumed quite early despite the destruction of many cinemas. The films that were shown in them were determined in large measure by the occupying forces. In addition to French, English, and American imports, cinema programs also included pre-1945 films and so-called "cross-overs", i.e. feature films — such as Helmut Käutner's "Unter den Brücken" or Karl Anton's "Peter Voss, der Millionendieb" — that were conceived or shot before May 1945, but premiered only after the end of the war. Recourse to older German films was frequently difficult for distributors, however, because a large part of the Reich's film inventory was unavailable, having been destroyed or lost during the war or confiscated by the Allies. 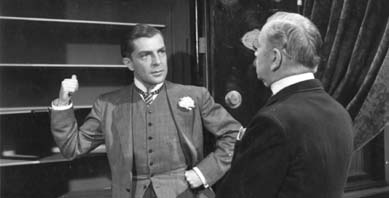 According to the June 1945 "Regulation for the Control of News Media No. 2", all German films made before the end of the war were to be delivered and subjected to a political testing procedure before they could be released again. Every print had to be equipped with a "Film Exhibition License" from the Allied Control Authority which confirmed that it could be released. In addition, every projectionist needed a permit and had to be officially registered with the Allied authorities.

The testing procedures, for which the film authority in the British zone had especially distinguished itself, involved the division of tested films into three categories. All films in Category A were classified as unobjectionable and immediately licensed for release. Category B films were licensed on the condition that cuts or changes be made. Whereas Category C films, most of which were "government commissions" with a clearly propagandistic function, were not allowed to be exhibited.

The "List of Prohibited German Films" that the three western Allies issued in early 1952 included 221 titles in Category C. This list was provided as a guideline to the German film industry's body for voluntary self control (FSK), an office that with the founding of the Federal Republic in July 1949 assumed the tasks of the Allied film censors, in order to determine conclusively the permission status of films from the National-Socialist period. 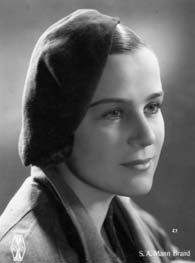 The great majority of films produced under the Nazis are today no longer officially prohibited from being exhibited. Only a handful of offensive propaganda films are still classed as "conditionally banned" [Vorbehaltsfilme] due to their racist, anti-Semitic, militaristic, or incendiary content; these can only be shown in closed gatherings accompanied by a scientifically sound introduction and discussion.

Guidelines for deciding how to treat films from the National-Socialist period thus drew an apparently clear line between a handful of "dangerous" propaganda films and the mass of commercial entertainment films. For a long time this distinction also influenced public debate and scholarly discourse. Beginning with the early studies of Nazi-period cinema made in the 1960s, discussion has proceeded more or less along two main lines. On the one side is the argument, which for reasons of opportunity has reflected the way the National-Socialist film legacy has actually been dealt with, that aside from a handful of exceptions, the cinema of the National-Socialist period had nothing to do with Nazi films but rather with a non-political star culture. Many have thus argued for normalization for the majority of these films; and this argument has been taken up by those with commercial interests in the matter, as well as by others seeking to justify their involvement in the production of National-Socialist films.

The other side has in turn levied a reproach against downplaying. Here the entire feature film production of the National-Socialist period is viewed in terms of ideology and the focus is on detecting National-Socialist manipulation devices.

In general, however, both the polarized evaluation of Nazi-period films between condemnation on the one side and vindication on the other, and the distinction between political and apolitical films, have had to do with the fact that, as film historian Eric Rentschler has pointed out, attributes devised by the National-Socialists were often adopted uncritically after the war.

The beginning of the 1990s saw a decisive turn in scholarship. Attention shifted away from the definition and categorization of National-Socialist film and towards the ideological function of feature films in the National-Socialist period in their wider discursive context. The call for the considered public treatment of this legacy, a demand that is as significant today as ever, has become audible again.