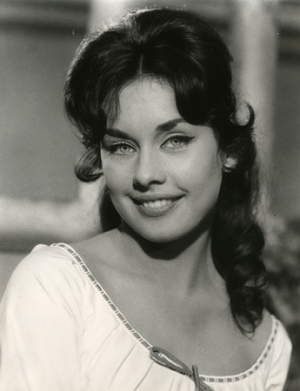 Vera Tschechowa was born in Berlin on July 22 1940. She was a descendant of a family of great artists: Poet Anton Tschechow (1860-1904) was her great-great uncle, her grandmother Olga Tschechowa (1897-1980) was a famous Ufa movie star. Vera's father was a physician, while her mother Ada Tschechowa also was an actress.

Following her graduation from high school, she relocated to Munich, where she started to study set design. Yet soon she switched to acting, and began to take classes with Annemarie Hanschke, Ernst Fritz Fürbringer and Marlise Ludwig. In 1957, she made her screen debut in the comedy "Witwer mit fünf Töchtern" ("Widower With Five Daughters"), and played a rebellious teen in Georg Tressler's – previously filmed but later released – drama "Unter 18" ("Under 18", AT). She had her final breakthrough as the female lead opposite Gert Fröbe and Joachim Fuchsberger in "Das Mädchen mit den Katzenaugen" (1958), followed by another major role in the war movie "Der Arzt von Stalingrad" ("The Doctor of Stalingrad").

After making her stage debut at the Freie Volksbühne in Berlin in 1959, Tschechowa joined the Deutsche Schauspielhaus in 1962. She later also had theatre engagements in Düsseldorf, Basel and Konstanz. Meanwhile, her screen career continued to thrive: After parts in "Meine 99 Bräute" (1958) and "Freddy unter fremden Sternen" (1959), her performance in the comedy "Und das am Montagmorgen" ("And That on Monday Morning", 1959) garnered her a nomination for the German Film Award. She next appeared in the crime drama "Der Schleier fiel" (1960) and "Die junge Sünderin" ("The Young Sinner", 1960) before starring in the acclaimed adaptation of Heinrich Böll's novel "Das Brot der frühen Jahre" ("The Bread of Those Early Years", 1962). Her performance in the film won her the German Film Award for Best Actress.

Despite her successful movie career, Vera Tschechowa focused on television from the mid-1960s on. Among her memorable TV credits were the thriller "Verhör am Nachmittag" (1965), the miniseries' "Duell zu dritt" (1971) and "Der Illegale. Biografie eines Spions" (1972), and "Erikas Leidenschaften" ("Erika's Passions", 1976). She also got rave reviews for her turn in the made-for-TV drama "Zeit der Empfindsamkeit" (1977).

During these years, Tschechowa also starred in some theatrical releases, including the crime drama "In Frankfurt sind die Nächte heiß" ("Hot Nights in Frankfurt", 1966) and the romance "Liebe und so weiter" (1968), in which she appeared opposite Vadim Glowna, whom she had married in 1967. Moreover, Tschechowa had roles in "Der erste Kreis" ("The First Circle", DK/D 1972), "Das Amulett des Todes" ("Cold Blood", 1975), and was the female lead in Alfred Weidenmann's 1978 adaptation of "Der Schimmelreiter".

In the 1980s, Vera Tschechowa worked predominantly in television, yet she also appeared in theatrical releases like the offbeat feature "Panische Zeiten" ("Panic Time", 1980) and "Desperado City" (1981). The latter was directed by her then-husband Vadim Glowna, with whom she also worked on the drama "Das rigorose Leben" ("Nothing Left to Loose", 1983), the autobiographical documentary "Tschechow in meinem Leben" (1985) and the adventure film "Des Teufels Paradies" ("Devil's Paradise", 1987). In 1986, she got rave reviews for her performance as the female lead in Rudolf Thome's "Tarot".

On TV, Tschechowa starred in adaptations of "Bekenntnisse des Hochstaplers Felix Krull" (1982), and "Blaubart" ("Bluebeard", 1984), and had a recurring role in the popular TV series "Ein Heim für Tiere" (1989-1991). In the 1990s, Tschechowa's on-screen appearances got rarer. In 1991, she had her last role in a feature release in Thome's "Liebe auf den ersten Blick" ("Love at First Sight"). The same year, she divorced Vadim Glowna and subsequently only guest-starred occasionally in TV productions. She later stated that the decline in script quality prompted her quasi-retirement from acting.

Vera Tschechowa is married to business consultant and TV producer Peter Paschek. Her son Nikolaus Glowna is an award-winning composer for film and TV productions.