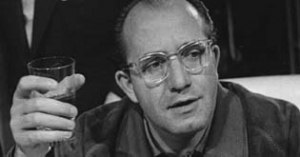 Alfred Weidenmann, born May 10, 1916, in Stuttgart, is mainly known as a director and writer of youth films and novels. In 1935, he filmed the Hitler youth film "Jungbann 2" on the island of Norderney and dealt with his experiences during the film’s shooting in his first youth novel "Jungzug 2". From 1942 on, he was in charge of Hauptabteilung Film of Reichsjugendführung, among other positions. In 1943, Wolfgang Liebeneiner signed him for Ufa where Weidenmann directed the national socialistic "education" film "Junge Adler" ("Young Eagles"), and also co-wrote the film with Herbert Reinecker. For "Junge Adler", he discovered Hardy Krüger and Dietmar Schönherr for the movie screen.

After the war, Weidenmann again collaborated with Reinecker, for instance, for the drama films "Canaris" ("Canaris: Master Spy") and "Alibi" that each won a German Film award and the romantic comedy "Scampolo", starring Romy Schneider. In 1959, Weidenmann took over as director of the two-part film version of "Buddenbrooks" ("The Buddenbrooks") after the designated director fell ill. Furthermore, he directed numerous comedies and entertaining crime films with well-known German actors during the 1960s. In the 1970s, he mainly focused on TV productions. During the early 1950s and the 1970s, Weidenmann also made a name as a prolific author of youth novels. He, for instance, wrote "Gepäckschein 666" (1953) that became a widely read long-seller and was turned into a TV movie. From 1984 on, Weidenmann mainly lived in Switzerland. On June 2000, he died in Zurich.