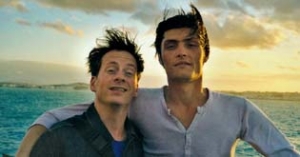 Slight Changes in Temperature and Mind

Until now timid Frank has thought of nobody but himself, worried about the many illnesses threatening him, stuffed himself with sweets and candy – and left everything else to his mother.

Marc, on the other hand, just as self-centred as Frank in his own way, plays the macho man: tough, cruel, agitated, unpredictable, altogether a pretty mean customer. A stupid accident brings this strange couple together and sends them off on a journey that will lead to the discovery of their own self.
Marc thinks he has killed someone and has to flee in a hurry. Nearby, Frank is waiting for his mother in their camping bus and accidentally runs over Marc’s motorcycle. Without hesitating a second, Marc seizes the camper with anxious Frankie in it and drives off. The main thing is just to get away. The further they drive, the more Frank overcomes his fear and begins to take an interest in his volatile captor. Marc for his part begins to trust this singular mama‘s boy and reveals that he wants to go to Morocco to find his long-lost father. Just as they are getting along, further trouble arrives when they pick up the mysterious Ilvy and oddball Pauli. Frank falls in love – to the great annoyance of Marc.
In this feature film debut, director and co-author Cyril Tuschi has put together a magical, humorous, sometimes grotesque road movie about a strange friendship that leads to "Slight Changes – In Temperature and Mind".