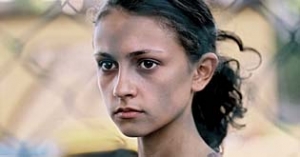 The story of Bica, called Bitch, who lives alone and neglected on the streets of Bucharest. Lured by the promises of former policeman Cristu, she follows him to Düsseldorf in order to earn the money she needs for herself and her little brother. But the job she has been offered turns out to be working in an group of organized pickpockets under horrific conditions. On one of her thieving tours she meets Milka, doughter of a well-to-do family and gets to know the "normal" life of teenagers for the first time: for her a feeling as breathtaking as it is confusing. When Cristu finds out about Bitch′s excursions into this new world, he tries to keep her away from it with brutal force. But Bitch′s new friends team up to help her …

Writer/director Martin Theo Krieger on "Beautiful Bitch": "The story of Bitch is based on real occurrences, experiences and living conditions. The question explored in the film which give it direction, emotion and drama is fictional, however, and gives the topic a universal meaning: it is about a friendship against all odds. About hope and the desire for a decent, self-determined life. And about the struggle that takes all the courage, confidence and energy that can be mustered so that a bit of this hope can be realized."