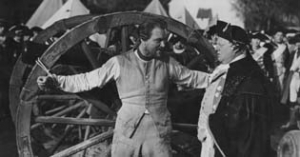 This propagandistic "pump-up" film of the Third Reich tells the story of the Prussian king Friedrich the Great. Following the defeat of Kunersdorf in 1759, Prussia is on the brink of their ultimate capitulation. In fact, Friedrich is safe, but half of the Prussian army is slain. Every sensible man near the king pushes for the surrender. Friedrich devolves his command to his brother. As Friedrich levels accusations of outrageous frivolity, the king augments himself in delusions of grandeur and victory and alienates himself from his advisors. He is obsessed with significantly changing the face of Europe through this war.

In the thick of the fight, the regiment leader Sergeant Treskow and the assiduous Luise (who cares for the wounded) find a tender love in one another.
Just before the gates of Torgau, the conflict reaches a decisive battle against the Austrian Army. Through Treskow′s deployment and the Russian Tsar′s sending troops to help, the Prussians emerge victorious. Even though the Sergeant (who is now married to Luise) dies, he at least does so in the arms of his "Führer".