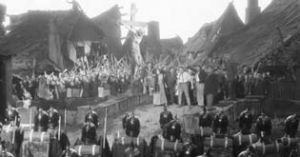 Screen adaptation of Gerhart Hauptmann′s eponymous play: The impoverished weavers are suffering from the exploitative methods of cruel factory owner Dreißiger. When former soldier Moritz Jäger returns from the city, he leads them in an uprising against their oppressor. Dreißiger flees, and after destroying his home, the weavers march to the next village where an industrialized mill has been built. But the owners want to pay even less, so the weavers start another riot. Finally, the army is sent in to quell the rebellion. Although the workers prevail in the end, their struggle for justice goes on.