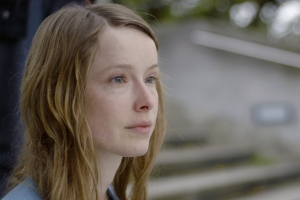 Odine Johne was born in Stuttgart on March 21 1987. Already as a student, she appeared in short films and worked as a voice talent in radio plays. She made her feature film debut in the TV comedy "Wie verführ’ ich meinen Ehemann" ("Seducing My Husband", 2007), followed by her turn in the award-winning theatrical release "Die Welle" ("The Wave", 2008) and the female leading role in the TV fantasy film "Brüderchen und Schwesterchen". In 2008, she enrolled in the actors' class at the Akademie für Darstellende Kunst Baden-Württemberg, from which she graduated in 2012. While studying there, she had guest-starring roles in several TV series, including a memorable turn as a mysterious musician who has a symbiotic relationship with her twin brother in "Polizeiruf 110 – Der Tod und das Mädchen" (2009).

In 2014, Johne had a supporting role in Edward Berger's "Jack" and appeared in staged scenes of the documentary "Szenario" ("Scenario"). Her performance in "Nordland", in which she plays a young woman travelling to the Polar Circle after a breakup, garnered her the award for Best Newcomer at the Filmkunstfest Mecklenburg-Vorpommern. She next starred as a feisty hitchhiker in the road movie "Hit the road Gunnar" (2015).

Odine Johne was cast as the female lead in Johannes Schmid's "Agnes", playing a physics student who starts a peculiar romance with a novelist. She won the award for Best Newcomer at the 2016 Max-Ophüls-Preis festival for her performance in the film.