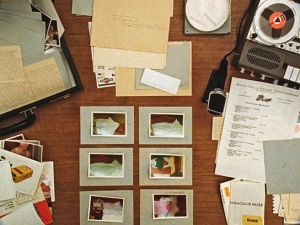 The story of two lives that happen to intersect at a particular time and place. A tangled mass of statistical raw material, intimate biographical details and arbitrary last resorts of that which could be called destiny, should such a thing exist. Probably just an artistic fabrication of, well, if not facts, then at least possibilities. The contents of a black briefcase lay a trail to one ostensibly ordered existence in the German Federal Republic in the autumn and winter of 1970. The signs point towards Cologne, a city which could well be emblematic for the country in this period.

The aforementioned case contains assiduously documented evidence of an affair between a middle-class businessman named Hans and his secretary, Monika. The film uses the recordings made by this man to explore the infinite possibilities and finite probabilities of this story of the relationship between one man and one woman. Appearing above these are other, divergent versions of events, as interjections as it were. A hermetically open work, to be viewed with eyes wide shut.