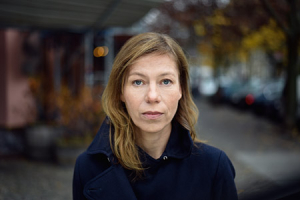 Jule Böwe, born 1969 in Rostock, worked as an occupational therapist before she became an actress. In 1994, she graduated from drama school and at first worked as a freelance actress. Then, in 1997, Böwe started to work at the "Baracke" of Deutsches Theater Berlin where she most notably caused a stir in Thomas Ostermeier's production of "Shopping and Fucking". In 1998, the theatre journal "Theater heute" named her "Best Young Actress". Böwe is a cast member of Berlin's Schaubühne since 1999.

Besides her work at the theatre, Böwe has focussed more and more on movie and TV productions. She won high praise for her intense performances in "Katze im Sack" ("Let the Cat Out of the Bag") by Florian Schwarz, and in the psychological drama "Close". Both films also featured actor Christoph Bach. In 2004, Böwe received the promotional award at the art prize of the city of Berlin.

During the following years, theatre actress Böwe was also seen regularly in movie and TV productions. Besides TV roles in series like "Tatort" (episode "Schleichendes Gift", 2007) or in TV movies like the comedy "Schokolade für den Chef" (2008) alongside Götz George, she mainly appeared in ambitious productions for the movie screen – for instance, in the Berlin omnibus film "Schwarze Schafe" ("Black Sheep", 2006), in the highly praised drama "Gefangene" ("Prisoners", 2006), or in the award-winning mid-length ensemble film "Torpedo" (2008/2009).

In the following years, Böwe participated in several stage prodcutions at the Schaubühne, and continued to also appear regularly in front of the camera for TV and feature film productions, mostly in supporting roles. Among these roles were a left-wing terrorist Christa Margot Fröhlich in "Carlos - Der Schakal" (FR/DE director: Olivier Assayas, 2010), a policewoman in the psychological crime thriller "Das letzte Schweigen" (director: Baran Bo Odar, 2010), a wife in the biting satire about friendship "Monkey King" (DE/CH, director: Oliver Rihs) and the mother of Peter Munk in the fairytale film "Das kalte Herz" ("Heart of Stone", 2016, director: Johannes Naber).

Friedemann Fromm cast her as a commissioner in the six-part political series "Die Stadt und die Macht" (2016). In two episodes of the popular "Tatort" series (2016, 2018) she played a commissioner from the fraud squad. She had other roles in TV productions such as in the family comedy "Nimm Du ihn" (2019), in the tragicomic friends story "Werkstatthelden mit Herz" (2020) as the wife of Armin Rohde's main character, and in the title role of the "Polizeiruf 110" episode "Monstermutter" (2021).

After smaller appearances in feature films as a bar woman in "Frau Stern" (2018) and as a pub regular in "Leif in Concert - Vol. 2" (2019) as well as a larger supporting role as a mother in the award-winning social drama "Rivale" (2020), Jule Böwe was back in front of the camera for leading role in a feature film in early 2021: In "Subtext", a mixture of dystopian tragicomedy and coming-of-age story, she played a woman who, together with her teenage daughter, struggles to find her place in a world divided into a three-class society of "main characters", "minor characters" and "outtakes".

In addition to her work as a stage and film actress, Jule Böwe has also appeared in numerous radio play productions.