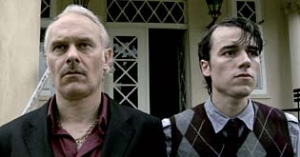 "Eleven Uncles" is a film version of Hamlet.

In 1220, Saxo Grammaticus wrote down for the first time the European myth "Amled′s revenge". A piece of revenge, savage and cruel: It′s a story around a young danish prince having to accept the murder of his father by his uncle and the sinister relationship between his mother and her new husband, his uncle, murder of his own father. The young prince decides to take revenge. Traveling for one year to England, he returns to finally save his mother and kill his uncle.

Herbert Fritsch tells this story in a modern and quite unconventional way, with digital techniques and the uncle duplicating himself as a symbol of evil.