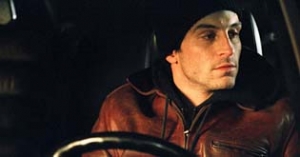 Let the cat out of the bag

A waitress named Doris returns to her seat on the train only to find Karl sitting there. How irritating. Not only does this well-dressed and rather ballsy guy burst into her compartment and then, later on, into her karaoke bar, he also interferes in her rather peculiar relationship with an ageing voyeur named Brockmann.

For when Doris gets off the train in Leipzig, Karl makes a snap decision to follow her. Although drawn to each other, Karl are Doris are somehow trapped in their clear-cut roles. Neither of them is prepared to let the cat out of the bag. And yet, neither has anything to lose – except for an unusual bet that takes them through a long, adventurous night of drunken karaoke singers, lascivious sisters and solicitous pimps.
"Our film has often been described as ‘current’. But that’s rubbish. We set out to tell a story that affects us all, that deals with the things that preoccupy many a thirtysomething: loneliness; relationships or rather the fear of being in a relationship, and the fear of experiencing loss. Something we definitely did not set out to do was make a cool film that contains some message about our generation’s inability to commit. It’s much more compelling to look behind the social context at the real subjects: love, death and loneliness. And I’m not interested in conveying a message. I think it’s more fascinating by far to develop an attitude to these recurring themes." (Florian Schwarz)