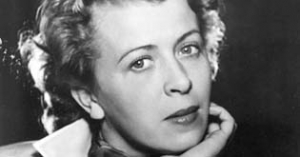 Helga Göring was born January 14, 1922, in Meißen. After finishing school in 1938, she started a three-year actor's training with Werner Hessenland at Dresden's Akademie für Musik und Theater and graduated with an honour degree. In Dresden, Göring also made her debut at Staatstheater, together with fellow actor Erich Ponto. Following this career start, she landed engagements at several theatres, including Bielefeld's Stadttheater, Hamburg's Kleines Haus, or Frankfurt am Main's Städtische Bühnen. Here, she put her acting talent to the test and starred in the role of Viola in Shakespeare's "Twelfth Night", or as Amalie in Friedrich Schiller's "Die Räuber" ("The Robbers").

When the war put her successful career on hold, Helga Göring returned to Dresden, where she had to work in a paper factory and later as an assistant in a military hospital. She waited until after the war to make a new start as an actress at the theatre in Stendal. But Stendal only served as a stopover – in 1947 the actress again returned to her home town Dresden and worked at Dresden"s Staatstheater until 1955.

The artistic director of Staatstheater, Martin Hellberg, then discovered Göring for the movies: In her movie debut "Das verurteilte Dorf" (1951/1952), directed by Hellberg, Göring played the leading role of Käthe Vollmer whose village is about to be vacated by the American occupation forces. Göring then starred in several mostly tragic roles that included a lot of life experience, for instance as the resistance fighter Gerda Löning in "Stärker als die Nacht" (1954), or as a desperate mother in "Zwei Mütter" (1956/57). Besides numerous film parts, Göring also successfully worked for the GDR television, DFF and made memorable performances, most often portrayals of outstanding historic personalities. Particularly noteworthy was Göring's portrayal of Käthe Kollwitz in "Sieh den Menschen. Eine Episode um Käthe Kollwitz" (1964).