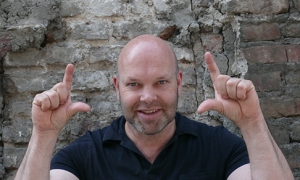 André Schäfer, born on 30 August 1966 in Troisdorf, studied history and journalism at the Ludwig Maximilian University in Munich from 1987 to 1992. Simultaneously, he completed an apprenticeship at the German School of Journalism in Munich, which he attended from 1987 to 1993. He then worked as a freelance journalist for various print media and produced numerous items and documentaries for various TV stations. From spring 1999 to spring 2001, Schäfer was editor and reporter in the cultural department of WDR television. He then founded the production company Florianfilm, together with his mother Marianne Schäfer in Munich. With Florianfilm he has since been realising his own projects and producing films by other directors.

His numerous TV documentaries and reportages include "Hauptsache Kaviar" (2004, in collaboration with Eva Gerberding), "James Dean - Kleiner Prinz, little Bastard" (2005, in collaboration with Werner Köhnke), "Der Jacobsweg" (2006, in collaboration with Sebastian Lemke) and "Der Bernsteinzug - Eine Reise durchs Baltikum" (2007, again in collaboration with Eva Gerberding). His documentary film "100 Porsches and Me" (2006), in which international celebrities such as Jerry Seinfeld talk about their fascination with German sports cars, was premiered at the Leipzig Documentary Film Festival. "Schau mir in die Augen, Kleiner" ("Here's Looking at You, Boy", 2007), on the constantly growing self-confidence of queer cinema, was shown in the Panorama section of the Berlinale. "Lenin kam nur bis Lüdenscheid - Meine kleine deutsche Revolution" (2008), based on the autobiographical book of the philosopher Richard David Precht, who grew up in the GDR, was nominated for Best Documentary Film at the German Film Awards 2009.

Schäfer also produced documentaries for television, among others about the writer John Le Carré ("König der Spione - John le Carré", 2008), Johannes Calvin ("Reformator und Reizfigur", 2009) and the actress Doris Day ("What a Difference a Day Made: Doris Day Superstar", 2009). For the big screen he made "Perry Rhodan - Unser Mann im All" (2011), on the makers, readers and cultural impact of the famous book series, "Rock Hudson - Schöner fremder Mann" ("Rock Hudson: Dark and Handsome Stranger", 2010), and "John Irving und wie er die Welt sieht" (2011), on the life and work of the popular writer.

With the author and journalist Moritz von Uslar, Schäfer realised the documentary film "Deutschboden" (2013) about everyday life in a small town in Brandenburg and the extent to which it coincides with the negative clichés about Brandenburg. "Deutschboden" was awarded the German Film Critics' Prize for Best Documentary Film. Schäfer was awarded the Bavarian Television Prize in 2014 for his TV documentary "Willy Brandt - Erinnerungen an ein Politikerleben".

Schäfer then shot "You'll Never Walk Alone" (2017), a documentary about the eponymous piece of music from 1945, which became an anthem of football fans all over the world. In collaboration with Eva Geberding, he then realized "Auch Leben ist eine Kunst - Der Fall Max Emden" (2018), about the German-Jewish textile entrepreneur and department store pioneer Max Emden (1874-1940), and how his descendants today are still fighting for art treasures to be returned that were stolen from the family by the Nazis. The film was released in German cinemas in April 2019.