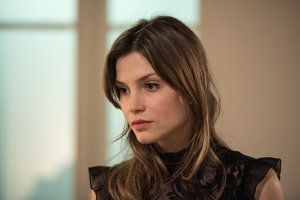 Sylvia Hoeks was born on June 1, 1983 in Maarheeze, the Netherlands. She started working as a model at the age of 14, however, her greater passion was acting. After graduating from school, she studied at the Theater Academie Maastricht from 2002 to 2006. From 2005 she was seen in Dutch television and feature film productions. For her role in "Duska" (NL 2007), as a cinema worker and secret crush of an aging film critic, Hoeks won Best Supporting Actress at the 2007 Nederlands Film Festival in Utrecht. Her lead role as a farmer's daughter in the historical drama "De Storm" (NL 2009) earned her the Best Actress award at the Tróia International Film Festival (Portugal). She had other important roles in the award-winning dramas "Tirza" (NL 2010) and "De bende van Oss" ("The Gang of Oss", NL 2011). During the Berlinale 2011 she was awarded as one of the 'European Shooting Stars' by the European Film Promotion (EFP).

Sylvia Hoeks played her first, smaller role in a German production in 2012 in "Vatertage - Opa über Nacht", as the ex-girlfriend of Sebastian Bezzel's main character. Shortly after, she was seen alongside Dieter Hallervorden in a leading role in the period drama "Das Mädchen und der Tod" ("The Girl and Death", DE/NL/RU 2012). Hoeks also appeared in several German and international (co)productions over the next few years: alongside Fahri Yardim in a leading role in the relationship story "Whatever Happens" (2017), as a physicist in the sci-fi drama "Rewind – Die zweite Chance" (2017), as a killer android in "Blade Runner 2049" (US 2017) and as the traumatized sister of the main character Lisbeth Salander in "The Girl In the Spider's Web" (US/SE/GB/CN/DE 2018), to name a few. From 2019, she took on a leading role as a powerful tribal queen in the post-apocalyptic series "See" (US 2019-2021).

In winter 2021, the German-international co-production "Plan A" was released in theaters. In it, Hoeks played a Jewish Holocaust survivor who plans an act of revenge against the German population with other survivors in 1945.