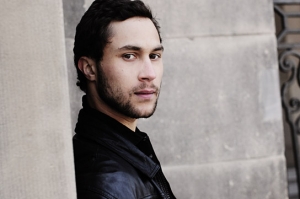 Ludwig Trepte, born 1988 in Berlin, made his acting debut already at the age of twelve in a small supporting role in Herwig Fischer's TV mini series "Beim nächsten Coup wird alles anders". After a series of smaller parts in movies and TV productions, Trepte caused a stir with two performances in 2005 when he played a charismatic right wing extremist in the skinhead drama "Kombat Sechzehn" ("Combat Sixteen"), and a teenage kidnapper in "Keller" ("Out of Hand"). The autodidact won the award of "Best young actor" for his part in "Keller" at the 2005 Max Ophuels film festival and was also nominated for an "Undine Award".

In the period following, Trepte made strong performances in three ambitious movie and TV productions: In "Sieben Tage Sonntag" ("Seven Days Sunday"), he portrayed a teenager without prospects who takes a cruel bet; in the award-winning film "Ein Teil von mir" ("A Piece of Me"), he was seen as a 17-year old father; and in the TV crime film "Ihr könnt Euch niemals sicher sein", he played a mentally unstable high school student. Alongside Frederick Lau and Alice Dwyer, he played the lead role of an unstable 17-year-old who falls into a downward psychological spiral during a vacation in France in the highly acclaimed youth drama "Was Du nicht siehst" ("What You Don't See", 2009).

After that, Trepte had several guest roles in TV series, such as in "Ein Fall für zwei" and "Die Pfefferkörner," as well as lead roles as a GDR escapee in the two-parter "Deckname Luna" (2011, TV) and as a Croatian groom in the culture-clash comedy "Rat mal, wer zur Hochzeit kommt" (2012). He received international attention for his leading role in the controversial TV three-parter "Unsere Mütter, unsere Väter" ("Generation War", 2012). In it, he played a German Jew who escapes the Nazis and joins Polish partisans by necessity. The three-parter won the International Emmy Award in the U.S. and received a special award for the acting ensemble at the Bavarian Television Awards.

Trepte's other significant appearances on TV include the supporting role of a Bundeswehr soldier in the docudrama "Eine mörderische Entscheidung" (2013), about the devastating German air raid near Kunduz in 2009. He was seen as a GDR sergeant major in Christian Schwochow's tragicomedy "Bornholmer Straße" (2014, TV), about the fall of the Berlin Wall, and as a young communist in the three-parter "Tannbach" (2015, TV), about a German village in the postwar years. The eight-part series "Deutschland 83" (2015), about espionage operations between the GDR and the FRG during the Cold War, in which Trepte played the pacifist son of a rigid Bundeswehr major (Ulrich Noethen), received much international attention. The short film "Erledigung einer Sache," starring Trepte, won the Student Oscar in 2015.

Ludwig Trepte had a striking big screen role in the fairy-tale drama "Im Spinnwebhaus" ("The Spiderwebhouse", 2015) as a mysterious vagrant who befriends a group of children left alone. "Nirgendwo" ("Nowhere") premiered at the 2016 Zurich Film Festival, with Trepte in the lead role of a student who must return to his provincial hometown after the death of his father.

In the next few years, Trepte was seen primarily in television productions. For example, he played the theologian and reformer Philipp Melanchthon in Julia von Heinz's "Katharina Luther" (2017) and appeared in several series: in "Tanken - mehr als Super" (2018) he played an ex-student who works at a gas station, in "Deutschland 86" (2018) a Bundeswehr general, in "Die neue Zeit" ("Bauhaus – A New Era") 2019) he was the famous designer Marcel Breuer and in "4 Blocks" (2017-2019) a former clan member.

Trepte had big screen roles in "Spielmacher" ("Playmaker", 2018) as a retailer and victim of a gangster boss, as the father of the title character in the children's film "Lauras Stern" ("Laura's Star", 2021) and as a police officer in the drama "Am Ende der Worte" (2021).