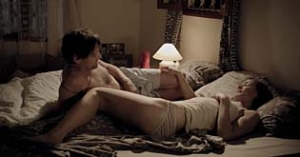 Ebbo and Vera Velten have spent the better part of the past twenty years living in different African countries. Ebbo is the manager of a sleeping sickness programme. His work is fulfilling. Vera, however, feels increasingly lost in Yaounde’s ex-pat community. She can’t bear the separation from her 14- year-old daughter, Helen, who is attending boarding school in Germany. Ebbo must give up his life in Africa or he risks losing the woman he loves. But his fear of returning to a land now remote to him increases with each passing day.

Years later. Alex Nzila, a young French doctor of Congolese origin, travels to Cameroon to evaluate a development project. It’s been a long time since he set foot on this continent, but, instead of finding new prospects, he encounters a destructive, lost man. Like a phantom, Ebbo slips away from his evaluator.