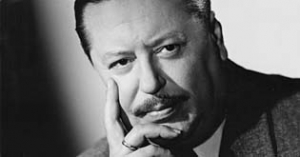 Paul Victor Ernst Dahlke, born April 12, 1904, in Groß-Streitz in Pomerania, worked in the Dorstfeld coal mine during his last year in high school and after his graduation in 1922. He then studied at Clausthal-Zellerfeld’s Bergakademie and turned to painting and the craft of wood cutting. Before he graduated from Bergakademie, he already enrolled at Technische Hochschule Berlin-Charlottenburg in 1924 and attended lectures in German studies and in theatre studies over the course of six terms.

From 1927 on, Dahlke attended Max-Reinhardt-Schule. In 1929, he performed in small roles at Lessing-Theater and toured with a small travelling theatre before he performed at Rose-Theater and at Theater in der Königgrätzer Straße. In 1931, Dahlke made his debut at Deutsches Theater in a production of Horváth"s "Geschichten aus dem Wiener Wald" ("Tales from the Vienna Woods"). During the following years, he performed in numerous roles, including roles in productions of plays by Hauptmann and by Shakespeare.

In 1934, Dahlke made his debut on the movie screen in the role of the Governor of a South Sea island in Heinz Hilpert"s film "Liebe, Tod und Teufel" ("The Devil in a Bottle"). With his robust, stocky, and sturdy appearance, he often played energetic characters and simple-minded souls like the role of Ruprecht in Gustav Ucicky"s film version of Kleist"s play "Der zerbrochene Krug" ("The Broken Jug"). Dahlke authentically portrayed quick-tempered as well as phlegmatic characters, for instance, the fussy and self-righteous accountant in Helmut Käutner"s film "Romanze in Moll" ("Romance in a Minor Key").

After the end of World War II, Dahlke performed as an entertainer in Salzburg and in Bad Wildungen for the forces of the occupation armies. In 1946, Erich Engel brought him to Munich"s Kammerspiele. From 1949 to 1953, Dahlke was a cast member of Munich"s Staatstheater and subsequently performed as a freelance actor at numerous theatres throughout Germany.

In German post-war cinema, Dahlke was soon designated to the roles of buoyant family fathers, for instance, in the film "Wochenend im Paradies" ("Love in the Tax Office"). Dahlke was only able to show his deadpan humor to advantage in film versions of novels by Erich Kästner, for instance, in the role of Justus in "Das fliegende Klassenzimmer" ("Flying Classroom"), in the role of privy council Schlüter in "Drei Männer im Schnee" ("Three Men in the Snow"), or in the role of Professor Kuckuck in the film version of Thomas Mann"s novel "Bekenntnisse des Hochstaplers Felix Krull" ("Confessions of Felix Krull").

When film productions started to offer him nothing but roles in light fare, Dahlke turned his focus to his TV work. On the TV screen, he was often played grumpy old men, stubborn people like the grouchy Rhine skipper in Wolfgang Staudte"s TV series "MS Franziska" or the restive grandfather in Elke Heidenreich"s fall-out shelter farce "Unternehmen Arche Noah".