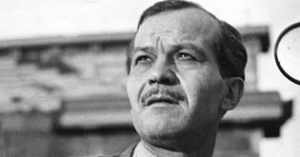 René Deltgen was born on the 30th of April, 1909. From 1927, he studied at the Acting School in Cologne, performing on stage at the city theaters in Cologne, Frankfurt am Main as well as in Berlin, including among others the Volksbühne. His first film performance was in Gustav Ucicky’s work "Das Mädchen Johanna" (Joan the Maid) in 1935.

Whether as an unscrupulous adventurer or charming lover in action and adventure films, Deltgen quickly became a star, appearing for example in such films as "Kautschuk" (Eduard von Borsody) and "Die 3 Codonas" (A. M. Rabenalt). In Karl Hartl’s Mozart film "Wen die Götter lieben", he played Ludwig van Beethoven.

After the war he performed cabaret for the allied troops, did stage performances at the Stadttheater in Constance in 1946 and the Städtischen Bühnen in Cologne in 1947. From 1949 onwards he worked again in film, playing the inwardly torn actor Stefan Gorgas in Harald Braun’s "Nachtwache" (Keepers of the Night). In the role of the Soviet secret agent officer Kazanow in Victor Vicas’ "Weg ohne Umkehr" (No Way Back, Bundesfilmpreis 1953) and Fürst Ramigani in Fritz Lang’s double films "Der Tiger von Eschnapur/Das indische Grabmal" (The Tiger of Bengal/The Indian Tomb), Deltgen played once more the earlier cliché role of a brutal cynical go-getter.

From 1960, he performed in various television productions, including the Durbridge criminal story "Das Messer" (Rolf von Sydow) and in TV series like "Sonderdezernat K1" and "Der Kommissar". He also played the main role in "Trotzki in Coyoacan" (Rolf Busch). One of his last roles is as the kind grandfather in the children’s series "Heidi". In 1978 he received the "Filmband in Gold" for his long-standing and exceptional contribution to German cinema.