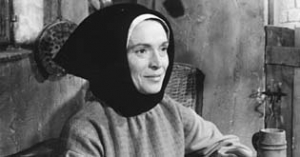 Marga Legal, born February 18, 1908, in Berlin, as Margarete Legal, daughter of theatre director, actor, and director Ernst Legal, grew up with her mother after her parents separated. After finishing school in Wiesbaden, she attended actor"s training in Munich and made her stage debut at the age of 19 at the theatre in Aachen. She soon played larger roles and performed in most diverse roles at theatres in Wuppertal, Stuttgart, Königsberg, and in Hamburg.

In 1935, Legal was banned from performing by the Nazi regime because of her partly Jewish heritage but her fate did not worsen after she married actor Heinz Klevenow and had three children with him. The family relocated to Prague in 1940. Marga Legal was not able to continue her acting career until after the war had ended. She at first performed at Hamburg"s Thalia-Theater before she went to Berlin to perform for several years at Theater am Schiffbauerdamm from 1946 on. She then joined Volksbühne and performed at Maxim Gorki Theater from 1955 to 1968. After a long hiatus from the stage she did not return to perform at Berlin"s Renaissance-Theater until old age.

In 1951/52, Marga Legal made her debut in a DEFA production in the role of widow Rühling in Martin Hellberg"s film "Das verurteilte Dorf". Subsequently, Legal starred in numerous other films, including "Alarm im Zirkus" (1953) and "Eine Berliner Romanze" (1956), both directed by Gerhard Klein, Konrad Wolf"s film "Sonnensucher" ("Sun Seekers", 1958), "Weißes Blut" (1959) by Gottfried Kolditz, and the Soviet-German co-production "Fünf Tage – fünf Nächte" ("Five Days, Five Nights"). In the film, Legal played the depressed museum clerk Luise Rank who develops a new courage to face life after the downfall of Nazi Germany when she starts to search for lost paintings.

Kurt Maetzig gave Marga Legal one of her few leading roles. In "Die Fahne von Kriwoj Rog" ("The Flag of Krivoy Rog", 1967), she played the wife of mine worker Brosowski (Erwin Geschonneck) and won the GDR National Award for the accurate execution of her role.

From the 1970s on, Legal more and more often starred in the role of grandmothers and instead of her numerous portraits of working women she now also made brilliant performances in several roles of bourgeois or even aristocratic women, for instance, in the role of Countess Lamas in the multi-part film "Sachsens Glanz und Preußens Gloria" (1985). Furthermore, Legal was able to successfully prove her comic talent. But she received most praise for her portrayal of Dietrich Bonhoeffer"s mother in Joachim Kunert"s film "Die dunklen Jahre" (1982). She also played the mother of Hans Fallada in Roland Gräf"s film "Fallada – Letztes Kapitel" (1988).

After the German reunification, Marga Legal appeared in numerous TV productions – as she had already done in the German Democratic Republic during the 1970s –, including the TV series "Polizeiruf 110", "Tatort", or "Großstadtrevier". However, she rarely returned to the movie screen.

Marga Legal had also been politically active and temporarily served as a member of Volkskammer. She died on October 30, 2001, in Berlin, at the age of 93 from the consequences of a car accident.