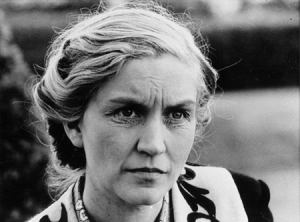 Marita Breuer was born in Düren on January 20 1953. The daughter of a schoolteacher developed an early interest in theatre and later moved to Cologne, where she first attended the music academy, but then decided to switch to acting.

In 1975, she enrolled at the Folkwang acting school in Essen, from which she graduated in 1978. She then joined the Stadttheater Gießen, and went on to work in experimental theatre groups. During that time, she combined her acting style, which was based on the teachings of Stanislawski, with influences from Lee Strasberg's method.

In 1981, Edgar Reitz cast Marita Breuer as the female lead for his epic "Heimat". She was the sole member of the cast to play her character in all its different life stages, ranging from youth to old age. Her memorable performance garnered her the Bavarian Film Award and the German Acting Award.

In the following years, Breuer appeared in several feature film, but mainly worked in television. All the while, she also remained a dedicated stage actor: She played the Elektra in "Orestie", starred in Strindberg's "Gespenstersonate" and was a company player of the Stadttheater Aachen from 2000 until 2005.

The fall of 2013 saw the release of Edgar Reitz' "Die andere Heimat – Chronik einer Sehnsucht", which works as a prequel to his previous "Heimat" films. Set in the mid-19th century, it stars Marita Breuer in the role of Margarethe. Along with her acting carreer, Marita Breuer also works as  a performance trainer and personality coach.