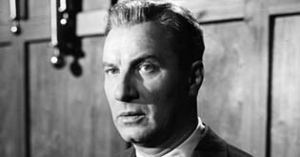 Martin Erich Fritz Held was born in Berlin-Wedding on November 11, 1908. After completing an apprenticeship as a mechanic, he pursued an acting career, and played – among others – on stages in Darmstadt and Frankfurt. In 1947, Held embodied General Harras in the first-run of Carl Zuckmayer"s drama "Des Teufels General", and from 1951 on, he worked as an actor at the Staatliche Schauspielbühnen Berlin. The same year saw his screen debut in "Schwarze Augen", and in 1954, he won the German Film Award for Best Supporting Actor for his portrayal of the infamous SS-Obergruppenführer Heydrich in Alfred Weidenmann"s spy thriller "Canaris".


As an actor, Held easily shifted from common man to upper-class citizen, and he equally convinced as the poor crook or the cunning criminal mastermind. In Wolfgang Staudte"s court room satire "Rosen für den Staatsanwalt", he plays a West-German district attorney and former Nazi military judge, who eventually meets a man whom he sentenced to death for stealing chocolate during the last days of the war. From the mid-60s on, Held excelled in comic roles like the aging lothario in "Das älteste Gewerbe der Welt" or the leader of a Gang of crime-fighting oldtimers in "Die Herren mit der weißen Weste".

In 1969, he played the hermit Krapp in Samuel Beckett"s staging of his one-man-play "Das letzte Band" (Krapp"s Last Tape". In 1978, his last feature film was released: In "Der Pfingstausflug", Held and Elisabeth Bergner play an old couple, which escapes from a senior citzens" home and re-examines 63 years of married life. In 1980, Held received a German Film Award for his lifetime achievements as an artist. During the last years of his career, he frequently appeared in TV-features an continued his theatre work. Martin Held passed away in Berlin on January 31, 1992.