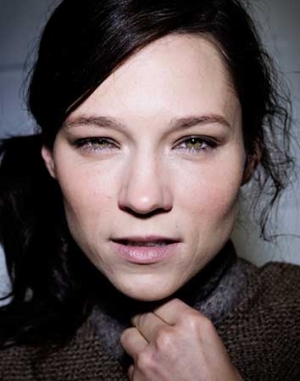 Sabine Timoteo, born Sabine Hagenbüchle in Bern in 1975, grew up in New Mexico, USA, and in Lausanne. From 1991 to 1993, Timoteo studied dance at Schweizerische Ballettberufsschule. She then worked for Heinz Spoerrli at Deutsche Oper in Düsseldorf but left already after two months because she did not want to do classical dance any longer. Instead, Timoteo toured with Carlotta Ikeda's butoh ensemble "Compaigne Ariadone".

Director Philip Gröning then met her in an actor's workshop in Munich and cast her for the leading female part in his film "L'amour, l'argent, l'amour" (Love, Money, Love) that was shot in 1996 but was not released before 2000. In the meantime, from 1997 to 2000 Timoteo became a professional cook in Bern. When the film was finally released, Timoteo both won the Bronze Leopard in Locarno and the Swiss film prize for her role as the prostitute Marie.

In the following years, Timoteo starred in Maria Speth's "In den Tag hinein" ("The Days Between", 2001) or Dominik Graf's drama "Die Freunde der Freunde" which won her a Grimme award. She also received rare reviews for her performance in Christian Petzold's "Gespenster" ("Ghosts", 2005). In Matthias Glasner's controversial film "Der freie Wille" ("The Free Will") Timoteo plays a woman who falls in love with a rapist.

For her performance as the enigmatic girlfriend of Jürgen Vogel's quirky character in the comedy "Ein Freund von mir" ("A Friend Of Mine"), Timoteo received a nomination for Best Supporting Actress at the 2007 German Film Award. The following year, she won the Swiss Film Award for her role in the made-for-TV thriller "Nebenwirkungen".

She continued to embody complex and often withdrawn characters, among them the photographer in the romance "After Effect" (2007), the grandchild of a fugitive Nazi in Michael Glawogger's "Vaterspiel" ("Kill Daddy Good Night") (2007-2009) and the psychiatrist of an unstable woman in "Brownian Movement" (2009/2010).

In 2011, "Die Farbe des Ozeans" ("Color of the Oceans") premiered at the Munich Film Festival. In the film, Timoteo plays a German tourist vacationing on the Canary Islands who is confronted with the plight of African refugees and the indifference of the local authorities. The film was released in Germany in Spring 2012. The same year, she appeared in the drama "Formentera" by Ann-Kristin Reyels. The film premiered in the Forum section of the 2012 Berlin IFF.

Her performance in the coming-of-age drama "Cyanure" ("Cyanide", CA/CH 2013) garnered Timoteo a Best Female Actor nomination at the Swiss Film Awards. Following her supporting roles in "Die schwarzen Brüder" ("The Black Brothers", 2013), "Praia do Futuro" ("Futuro Beach", 2014) and "Land der Wunder" ("The Wonders", 2014), she starred in the romantic drama "Driften" ("Drift", CH 2015), which relates the "amour fou" between a young ex-con and an English teacher and won her the 2015 Swiss Film Award. The same year, she joined the cast of the youth novel adaptation "Die Mitte der Welt" ("Center of My World").

She won the Latvian Film Prize for her leading role as Latvian writer Melānija Vanaga in "Melanijas hronika" ("The Chronicles of Melanie", LT/CZ/FL 2016), about the mass deportations in Russian-occupied Lithuania in 1941.

Lighter fare was her role as mother of the two young main characters in the children's film "Matti und Sami und die drei größten Fehler des Universums" ("Matti and Sami and the Three Biggest Mistakes in the Universe", DE/FL 2018) and the part of an eccentric trucker in the award-winning road movie "Wer hat eigentlich die Liebe erfunden?" ("Cloud Whispers", DE/CH 2018). In "Cronofobia", an oppressive study of guilt and grief, she was a depressed widow. In the family drama "Wie ich lernte, bei mir selbst Kind zu sein" ("How I Taught Myself to Be a Child", AT 2019) she was the wife of a Viennese confectionery manufacturer who is also an eccentric and despotic patriarch. For her role in the tragicomedy "Tambour battant" (CH 2019), about two chapels from a small village in the Valais, both of which want to represent their community at a music festival, Timoteo received her sixth nomination for the Swiss Film Prize, three of which she has won so far.

She had a leading role in the drama "Sunburned" (2019), as a disinterested mother whose 13-year-old daughter wants to help a young beach vendor from Senegal during a vacation to get the money he needs to visit his father.