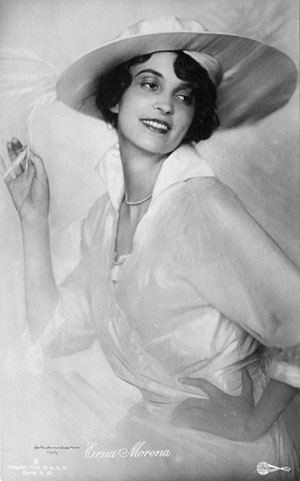 Erna Morena was born Ernestine Maria Fuchs on April 24, 1885, in Wörth. At the age of 17, she began to study art history, ceramics and metal processing in Munich. She then went to Paris for several months before taking a job as a nurse in Strasbourg. But already soon after, she went to Berlin to work as nurse. There, Morena took actor"s training at Max Reinhardt"s from 1910 to 1911 and became a cast member of Deutsches Theater right after. Her first film was "Sphynx" by Eugen Illés in 1912/13. Illés was the director of all her films at Duskes-Filmgesellschaft, before Morena went to Messter-Film GmbH in 1914, where her films were distributed under the trademark of "Erna Morena Film Serie". Morena then went to PAGU where she played a highly praised part as a novice in Paul Leni"s drama "Prima Vera".


Critics praised Morena for her subtle play and for ability to lend an unexpected depth even to plain roles. Morena was married to Wilhelm Herzog, an editor and playwright, who also made up her pseudonym Erna Morena. In 1918, she found her own production company "Morena Film GmbH" but already had to shut down her business after two years due to the economic effects of the November Revolution.

Morena was most successful in Richard Oswald"s films like "Tagebuch einer Verlorenen" (The Diary of a Lost Woman), a film that became a classic drama. But Morena also proved her great acting abilities in comedies like "Manulescus Memoiren" (The Memories of Manolescu) or the satire "Kurfürstendamm" (both 1920). The journal "Film-Kurier" (Nr. 221/1920) described her performance in these movies as "sensous", "elegant", and "higly refined". But although Morena played further leading parts in major productions like Murnau"s "Der Gang in die Nacht" (The Dark Road, 1920) and Joe May"s "Das indische Grabmahl" (The Indian Tomb, 1921), her career began to fade in the mid-1920s. Despite the success of "Grand Hotel" (Hotel Boulevard, 1927) and "Somnambul" (The Somnambulist, 1929), Morena was only to be seen in minor parts of "matured women" after the advent of the sound film.
From the mid-1930s Morena withdrew from the film business and opened a boarding house for artists in Munich. She only appeared in two more movies: Morena played a small minor part in Vait Harlan"s "Jud Süss" (1940) and took her final leave from the film business in a film with the highly symbolic title "Unsterbliche Geliebte" (1950), also directed by Veit Harlan. Erna Morena died on July 20, 1962, in Munich.