"One thing that cannot be denied is that military films have come into fashion in a big way." With these words, the magazine Lichtbild-Bühne in February 1932 commented on the immense popularity of the "hilarious military farces" of the early 1930s. The comment was occasioned by the premiere of "Der schönste Mann im Staate" (The Most Beautiful Man in the State), directed by Carl Boese, who also made the film that really got the ball rolling: Boese's "Drei Tage Mittelarrest" (Three Days Arrest) was the second-most popular film of 1930–31, outdone only by the considerably more costly box-office hit "Die Drei von der Tankstelle" (The Three From the Filling Station). All told, "Drei Tage Mittelarrest" brought in over 1,400,000 Reichsmark — almost six times as much as its production costs. The reason why military comedies were so successful, according to the Lichtbild-Bühne, was that they reminded "the vast majority of male spectators of a phase of life they had in common, the more pleasant and lighthearted moments which they enjoyed thinking back on." The "female spectators", on the other hand, were "tickled to observe the 'Lord of Creation' in a phase of life when he was the lowest of the low on the totem pole." 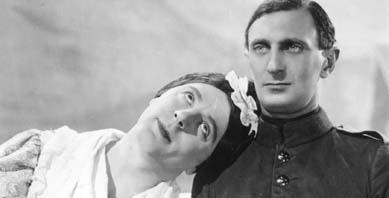 The issue of time played an essential part in the fundamental structure of military farces. Like its successors, "Drei Tage Mittelarrest" is set in the period before World War I and was advertised with the slogan "A Talking Picture Farce from Before the Great War." In this respect military farces also appealed to "what audiences imagined as a simpler, less problematic time", as the film historian Horst Claus writes. "Accordingly, the films depicted the behavior of recruits in their barracks more along the lines of schoolboys in a boarding school. The military was shown as the 'school of the nation', and the garrison command as superior in all ways to the chaotic, squabbling institutions of civilian life." The tradition of the military comedy was born in the early days of German film history. Film historian Thomas Brandlmeier considers the genre "a German invention" and writes: "Films like 'Es wär so schön gewesen' (It Would Have Been Wonderful, 1910), 'Hurrah Einquartierung' (Hurray For Billetting, 1913) and 'Pantoffelhelden' (Slippered Heroes, 1912) were without analogue in any other country. The militarily drilled body appears elsewhere only as a supporting figure." 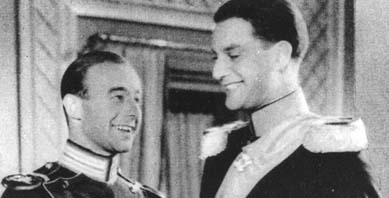 From the end of 1930 to the end of 1932, more than a dozen comedies followed the recipe for success provided by "Drei Tage Mittelarrest" — on the one hand, recalling the "good old days of the military", on the other, neutralizing or even ridiculing hierarchies, even if their satirical and ironic power was seldom as pronounced as that of "Drei Tage Mittelarrest". "Kasernenzauber" (Magic of the Barracks, 1931) and "Dienst ist Dienst" (Duty is Duty; 1931) were as much a part of this high phase of the military farce as "Der Stolz der 3. Kompanie" (Pride of the Third Company, 1932) starring Heinz Rühmann and Adolf Wohlbrück, which was later banned by the Nazis for its ironic treatment of the military hierarchy. During the Third Reich, the subgenre of the military farce vanished almost entirely; exceptions include "Die vier Musketiere" (The Four Musketeers, 1934) and "Der Etappenhase" (The Rabbit, 1937). The film hits from the beginning of the 1930s were banned as "liberalistic" and shelved. Only after World War II did the military comedy surface again, not infrequently in b-movie form or as a romanticizing look back at "better" times, with films like "Mikosch rückt ein" (Mikosch Report for Duty, 1952), various adaptations of Jaroslav Hasek's good soldier Schweik, or later attempts like "Wenn Ludwig ins Manöver zieht" (When Ludwig Does Maneuvers, 1967) and "Die Kompanie der Knallköppe" (The Company of Jerks, 1971). But a wave of successes like that of the beginning of the 1930s was not to be repeated.