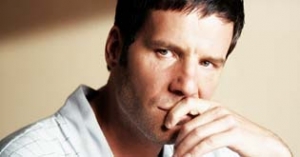 Tim Bergmann was born in Düsseldorf on March 2 1972. From 1991 until 1994, he studied acting at the renowned Otto-Falckenberg-Schule in Munich. During that time, he already appeared in theatre plays at the Münchener Kammerspiele. In 1995, he made his screen debut in a small supporting role in Rainer Matsutani's crime caper "Nur über meine Leiche". The same year, he was cast as the lead for the TV series "Zwei zum Verlieben" (1995-1996). He also gained popularity with his second screen role in Rolf Silber's box-office hit "Echte Kerle": For his portrayal of a gay auto mechanic, Bergmann was nominated for a German Film Award .

Moreover, he participated in Hans-Christoph Blumenberg's semi-focumentary drama "Die letzte Schlacht", a re-enactment of the final days in Hitler's bunker. Meanwhile, he made himself rare on the big screen, and after "Mondscheintarif" (2001), it took nine years before Bergmann again starred in a cinema release: In Dennis Todorović's gay romantic comedy "Sascha", he played a piano teacher who is adored by his student.

In addition to his film and TV career, Tim Bergmann continues to appear in the theatre. Since September 2010, he appears alongside Michael von Au in "Die Au Mann Schau – spontan aber herzlich" at the Bayerische Staatsschauspiel. Tim Bergmann lives in Munich.