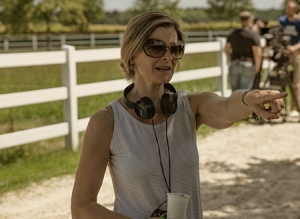 Sharon von Wietersheim was born on October 9, 1959 in Fort Stewart, Georgia, USA. When she was two years old, her family moved to Germany. She gained first professional experience as an assistant director at the Munich Residenztheater. She then took acting lessons and was seen in several TV productions between 1988 and 1994, mostly in smaller supporting roles, such as in the Munich "Tatort" episode "Tiere" (1991) and in the Christmas three-part series "Ruby" (1991) with Rex Gildo.

In 1994, Sharon von Wietersheim started working behind the camera: she founded the production company "Rich and Famous Overnight" in Munich and made her first short film "The Necklace" (1994), which was nominated for the 1995 German Short Film Award. The following year, she presented her feature film debut at the Munich Film Festival, the relationship comedy "Workaholic", with the then newcomers Christiane Paul and Tobias Moretti in leading roles. Afterwards she made the comedies "Supersingle" (1998) and "Ein Scheusal zum Verlieben" (1999) as well as the social drama "No Taboo" (2000), about a group of street kids in Berlin. As a German-American co-production, the family comedy "Time Share" (2000) with Timothy Dalton and Nastassja Kinski was created; in the US, the film was broadcast on television, in Germany it had a theatrical release. As a writer, von Wietersheim was responsible for the screenplays of the television drama "Zerschmetterte Träume - Eine Liebe in Fesseln" (1999, directed by Johannes Fabrick) and the feature film "Suche impotenten Mann fürs Leben" (2001, directed by John Henderson).

Despite these successes, Sharon von Wietersheim took a longer break from filmmaking. She wrote the script for the much acclaimed biopic "Käthe Kruse" (2015, directed by Franziska Buch), but did not produce her own films. It was not until 2018 that Wietersheim realized a new film as author, producer and director: The youth film "Immenhof – Das Abenteuer eines Sommer", very freely based on motives from the "Immenhof" film series of the 1950s. The film was released in German cinemas in January 2019.