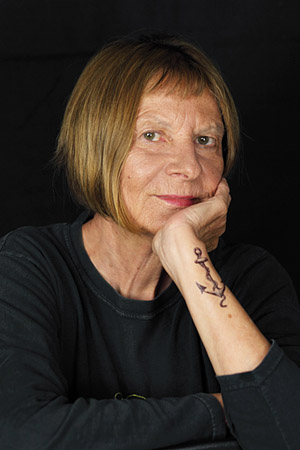 Monika Treut, born in Mönchengladbach on April 6, 1954, graduated from a state girls' school and went on to study German and political science, graduating in 1978. While still a student, she worked from 1974 until 1982 as an employee at media centers, including in Marburg, Frankfurt and Berlin: here she organized film screenings and was involved in the production of video documentaries.

In 1984 Treut received her doctorate in philology in Marburg with a dissertation "The Cruel Woman: Female Images in the Writing of Marquis de Sade and Leopold von Sacher-Masoch". In the same year, she also founded Hyäne I/II Filmproduktion in Hamburg with her then life partner, director and cinematographer Elfi Mikesch. Mikesch also was director of photography on almost all of Treut's films over the next 20 years.

A year after founding the film production company, Treut made her feature film debut with the experimental "Verführung: Die grausame Frau" ("Seduction: The Cruel Woman"), which she co-directed with Mikesch. One of the central works of queer cinema in Germany, the film deals with female lust including sado-masochistic fantasies and acts, and sparked controversy primarily because of its questioning of power relations and gender roles, which many saw as a provocation. While audiences and critics in Germany vacillated between praise and aggressive reviews, the film, which was inspired by Leopold von Sacher-Masoch's novel "Venus in Fur", was positively received at international festivals.

After working as an assistant director to Werner Schroeter at the Schauspielhaus Düsseldorf in 1987, Treut made her second feature-length film with the award-winning drama "Die Jungfrauenmaschine" ("Virgin Machine", 1988). This film took a humorous turn against the notion and conventions of romantic love and focused on the self-confident and self-determined love lives of women in San Francisco. Just like in "Verführung: Die grausame Frau", in "Die Jungfrauenmaschine" too, Treut dismantled gender and sexual identities in various ways and thus became one of the pioneers of New Queer Cinema, especially queer-feminist cinema. In the years that followed, exploring the depths and ambiguities of gender and overcoming repressive sexual moral codes continued to form a central theme of her films.

After the award-winning comedy "My Father Is Coming" (1991), which was made in New York, Treut shifted her focus to making documentary films. In this field, under the banner of "Hyena Films", which she founded on her own in 1992, she realized some of her most important documentary works, some of which won awards: "Female Misbehavior" (1992), for example, focuses on four non-conformist women, including Annie Sprinkle and Camille Paglia; the 1999 "Gendernauts – Eine Reise durch die Geschlechter" ("Gendernauts") is one of the first films ever to portray trans* people and the trans* movement in San Francisco. According to Treut, her teaching at the Art Institute had made her at home in the lesbian-gay and then genderqueer scene of the city. In 2001, she made "Kriegerin des Lichts" ("Warrior of Light") about the internationally known artist and human rights activist Yvonne Bezerra de Mello and her work with street children in Brazil, followed by "Den Tigerfrauen wachsen Flügel" ("Tigerwomen Grow Wings", DE/TV 2005) about three generations of women in Taiwan.

In 2009, Treut's first feature film since 1991, "Ghosted" which also had a Taiwan connection, was released in cinemas. In this lesbian love story set in Taiwan and Germany, Treut worked with elements of traditional Taiwanese ghost stories, among other themes.

Treut embarked on a voyage of discovery through Taiwan's diverse culinary traditions in 2012 in her documentary "Das Rohe und das Gekochte" ("The Raw and the Cooked - A Culinary Journey through Taiwan", DE TW) which - like several of her films before - premiered at the Berlinale. She then turned her attention once again to a feature film project: set in rural northern Germany, the low-budget production "Von Mädchen und Pferden" ("Of Girls and Horses", 2014) was about a 16-year-old school dropout who falls in love with her female trainer during an internship at a horse farm.

With her next two projects, Monika Treut then revisited subjects she had covered in earlier documentaries: For "Zona Norte" (2016), she returned to Rio de Janeiro fifteen years after "Kriegerin des Lichts" to document the development and sustainability of the alternative school project Uerê. In 2021, the digital edition of the Berlinale premiered "Genderation," in which Treut revisits the pioneers of the trans* movement in San Francisco portrayed in "Gendernauts" and explores how aggressive gentrification as well as the political climate, especially under the Trump administration, have affected the genderqueer community of yore.

In addition to her work as a filmmaker, Treut has been teaching and lecturing at Colleges, Art Institutes and Universities, mainly in the United States. Throughout her career, film festivals around the world, including Mexico City, Rio de Janeiro, Sao Paolo, Taipei, Toronto, Cambridge, Helsinki, Hamburg, Prague, Warsaw, Athens, Los Angeles and Lisbon, have dedicated retrospectives to her work.