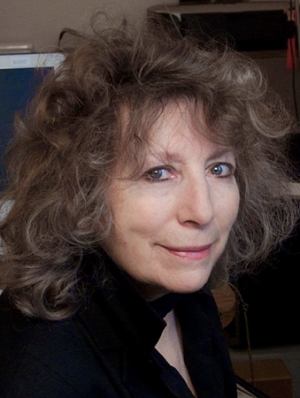 Elfi Mikesch was born May 31, 1940 in Judenburg, Austria, as the daughter of a projectionist. After finishing school, she graduated from an apprenticeship as a photographer in Judenburg. "I have learned to become a photographer in the countryside, in old sooted or dusty artist's workshops where portrays, passport photographs, and war memorials were part of the range of goods and where the singer's ball was the year's highlight" (Mikesch). Dissatisfied with her apprenticeship, Mikesch started to paint and to read E. A. Poe and E. T. A. Hoffmann. At the end of the 1950s, she went to Innsbruck where she met painter Fritz Mikesch whom she married in 1960.

In 1963, she and her husband moved to Frankfurt am Main. There she met Rosa von Praunheim. In 1965, they moved to West Berlin where Mikesch worked for the publisher V. Magdalinski, for instance, for a multi-part publication called "Licht" by Fritz Mikesch. Elfi Mikesch took on the stage name "Oh Muvie" and together with Rosa von Praunheim published "Oh Muvie" under her stage name, starring Rosa von Praunheim and Carla Aulaulu, among others, "a Berlin-based anarchistic photo story". Besides her work as a photographer, Mikesch started to make Super-8 films. In 1970, she finished the short film "Charisma" based on motives of E. A. Poe's story "The Mask of the Red Death".

Together with Praunheim and Fritz Mikesch she went on a world trip in 1971. During the trip, they finished the film "Leidenschaften" ("Passions"), directed by Praunheim. "An irregular, 'dirty' kaleidoscope film that compares to a conventional journey film like the smudgy palette to a painting." (Klaus Kreimeier). Elfi Mikesch was in charge of the camera, costume design and make-up, while Fritz Mikesch played the leading role.

After her second Super-8 film "Family Sketch" about the "miniature catastrophes in the kitchen and in the household" (Mikesch), she produced the slide show "A Study of Mary", a study of the Scottish queen Maria Stuart, in 1977. The project that was exhibited in Werner Kunze's gallery in Berlin, consisted of still photographs and a series of slides that were accompanied by sounds, music, and shreds of language over a duration of 22 minutes. "The drama of a woman who tried a sort of liberal emancipation in a time of change but got caught in the pitfalls of the world of men... A small master piece, ardent, dramatic, energetic, and tremendously aesthetic." (Hans Ohff)

From June 1978 to April 1980, Mikesch was in charge of the cover design of the magazine "Frauen und Film" and published her photo story "flageolett" about the Hamburg-based film makers Silke Grossmann and Heinz Emigholz in the magazine.

In 1980, she finished "Was soll'n wir denn machen ohne den Tod" ("What Shall We Do Without Death"), a documentary film about two women in an old people's home in Hamburg. "The film neither denounces its protagonists, nor is an invitation to voyeurism. Instead it takes the reducedness of the elderly people as a particular emotional, physical, and social form of life serious, their confusion as well as their lucid moments." (Uta Berg-Ganschow)

In the same year Mikesch also shot the short video film "Apocalypso" and dedicated it to Friederike Petzold and her video channel "Canale Grande": "A choreography for light. Moving light creatures the rhythmic dissolution of shapes on the surface of several photographies, and draws via the video camera and together with a collage of sounds a new illusion of the places Baalbek, Homs, New York, Berlin." (Mikesch).

"Macumba" (1981/82) that connects an experimental film language with narrative feature film elements "follows the obsessions, mannerisms, frustrations of the people in a teardown house (...) collects traces of the people that had lived in Kurfürstenstraße: traces of the present. (...) Maya Deren's notes from Haiti have found their counterpart in Elfi Mikesch's Kurfürstenstraße. An anthropological expedition and at the same time a poetic undertaking." (Dietrich Kuhlbrodt)

Her film project "Verführung" ("Seduction") that she had developed together with Monika Treut, the writer of the book "Die grausame Frau" ("The Cruel Woman", 1984), based on themes from Sacher-Masoch's novel "Die grausame Frau" initially fell victim to the film politics that were tightened by the minister of the interior, Friedrich Zimmermann. Although the screenplay was positively reviewed by the responsible commission of experts, the film's subsidy was "held back" by the ministry of the interior. The film was finally realized with the support of Filmbüro Hamburg and of Filmbüro Nordrhein-Westfalen but received mixed reactions at its premiere in the 1985 International Forum for New Cinema at the Berlinale film festival.

As co-director, Mikesch contributed the segments "Ich bin ein Gedicht" and "Eva Mattes" to the compilation film "Rosas Welt" (2012, TV). Her feature film "Fieber" ("Fever", AT/LU 2014), which relates the story of a woman investigating her father's dark past in the French colonial wars, premiered in the Panorama section of the 2014 Berlin IFF and won the Special Teddy Award.