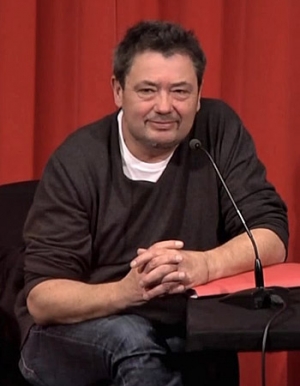 Lutz Dammbeck in the Deutsches Filmmuseum, Frankfurt am Main, November 22, 2015

Lutz Dammbeck was born in Leipzig on October 17 1948. He trained to be a type setter, and from 1967 until 1972, he studied graphic design and book art in Leipzig. Following his mandatory service in the East German Army, he worked freelance as a painter and graphic designer. From 1976 on, he also wrote directed and produced animation and experimental films for East German film studio DEFA. In 1977, he began work on the "Herakles concept", a large-scale multimedia project combining installations, painting and film that he pursued until 2002.

Dammbeck applied for an exit visa from the GDR and eventually relocated to Hamburg in 1986. In 1990, he founded his own production company, through which he completed documentaries like "Zeit der Götter" (1993), "Dürers Erben" (1995) and "Das Meisterspiel" (1998). The latter film, which contemplates possible similarities between iconoclastic attacks on art and political terrorism, garnered the Silver Dove at the DOK Leipzig Festival.

In 1998, Dammbeck became a professor at the Dresden art academy, where he incepted a project class on new media in 2000.

2005 saw the release of his acclaimed and award-winning documentary "Das Netz – Unabomber, LSD und Internet", in which Dammbeck explores the rise of the internet in relation to art and everyday culture while contrasting these musings with the motives of paranoid terrorist Theodore Kaczynski who became known as the infamous Unabomber. The same year, Dammbeck received the Käthe-Kollwitz –Award of the Berlin Academy of the Arts.

In addition to his work as filmmaker and teacher, Dammbeck has been continuously creating visual art and installations. Since the 1970s, his body of work has been the subject of numerous international exhibitions, including shows at the Brecht-Zentrum in Berlin (2000), at the Museum der bildenden Künste in Leipzig (2006) and the Sprengel Museum in Hannover (2010).

In 2012, Dammbeck began production on his next feature-length film, which premiered three years later at the 2015 Munich Film Festival: "Overgames" is a documentary that investigates whether games may change the world and if people can be "re-programmed" by games. After winning the Goethe-Institute's documentary award at the DOK Leipzig Festival, the film was released in spring 2016.