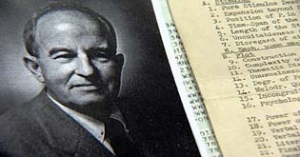 In 1995, the FBI arrested both the famous and infamous "Unabomber", Ted Kaczynski, who with his terrorist activities wanted to fight against the increasingly technological world. In his documentary, Lutz Dammbeck raises the question, to which extent was Kaczynski’s behaviour connected to and influenced by the work of famous mathematicians, physicists, scientists involved in cybernetics as well as multi-media artists - and how far his acts are a result of the ever expanding global network.