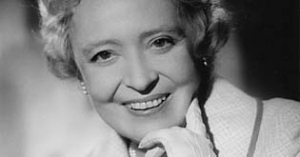 Käte Haack was born on August 11th, 1897. After finishing school she took acting lessons at Seraphine Détschy"s and became a cast member of the Göttingen theatre in 1914. One year later, she played her first role in Max Mack"s film "Pension Lampel". After a highly praised performance in Mack"s "Der Katzensteg" (also in 1915), Haack further pursued her movie career. During the 1910s she portrayed a wide range from good-natured to vicious characters, but was more or less reduced to parts of dull bourgeois women or amiable housewives in the 1920s. The technological change from the silent movie to the sound film did not pose a threat for her career. At the same time she changed her image from a "young and street-smart girl" to a "matured woman".


During the 1930s, Haack was one of the most successful and popular actresses and appeared in box office hits like "Emil und die Detektive" (Emil and the Detectives, 1931), "Der Hauptmann von Köpenick" (The Captain from Koepenick, 1931) and "Fridericus" (1936). In the 1940s, she starred in elaborate large-scale productions like "Münchhausen" (The Adventures of Baron Munchhausen) and "Bismarck". Even after World War II, Käte Haack remained one of best-known and most successful actresses of the German cinema and played in films ranging from melodramas like "Herz der Welt" (The Alfred Nobel Story) to crime movies like "Dynamit in grüner Seide" (Death and Diamonds / Dynamite in Green Silk) and comedies like "Der letzte Fußgänger" (The Pedestrian). Furthermore, she received rare reviews for her roles as "Grande Dame” in "Der Lord von Barmbeck" (1976) and "Grete Minde – Der Wald ist voller Wölfe" (1977) – a type of role she often portrayed at the end of her career.

In total, Käte Haack starred in more than 200 films as well as in numerous TV movies and series like "Zwei ahnungslose Engel" (1969) und "Sergeant Berry" (1974) during the 1960s and 1970s. Käte Haack died on May 5th, 1986 in Berlin. She was married to actor Heinrich Schroth. Her daughter Hannelore Schroth and her step-son Carl Heinz Schroth have also followed a career in acting.