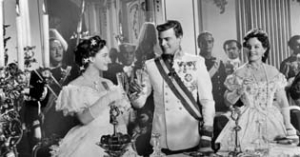 1853. Duke Max of Bavaria is living together with his wife and his daughters Helene, called "Nene", and Elisabeth, "Sissi", in Possenhofen at Starnberg Lake. The sister of his wife Ludovika, archduchess Sophie, is the mother of young Austrian emperor Franz Joseph. One day Sophie tells her sister that she is intending to marry Franz Joseph with Helene. Sophie invites Ludovika and her two daughters to the engagement′s celebration in Bad Ischl. Tomboyish Sissi very soon makes an exhibition of herself and is exiled to her room. But she runs away and goes on a long walk outside the town.

Accidentally she meets the young emperor there, but hides her identity. Despite of that he is enchanted by her. At the big reception the emperor only has eyes for her. To the dismay of his mother he announces the engagement with – Sissi. Sissi travels over the Danube to her new homeland Austria and is greeted enthusiastically by Franz Joseph and the people of Vienna.

First part of the famous "Sissi"-Trilogy.