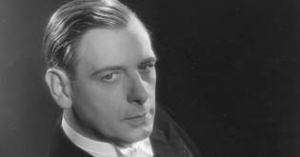 Johannes Riemann was born on March 31, 1888, in Berlin. He grew up under modest circumstances after his father"s early death and aspired to a career as an oratory singer after he was accepted as a teenager at Berlin"s Hof- und Domchor. But after his vocal change, a teacher recommended that he should turn to another art form: acting.

Riemann then took acting lessons with Anna von Strantz-Führing and with Alexander Strakosch and landed his first engagement at Berlin"s Hebbel Theater in 1908 at the age of 20. During the following years, he performed at provincial theatres in Teplitz, Meran, and Marienbad before he went to Berlin"s Volksbühne in 1911. One season later, he changed to Weimar"s Hoftheater. In 1916, Max Reinhardt eventually brought him back to Berlin and made him a cast member of Deutsches Theater.

At the same time, Riemann met actress Henny Porten who after a theatre performance helped him to land his first role in a film at Porten"s side in "Gelöste Ketten" that premiered still in 1916. In 1919, Riemann became known to a wider audience with his performance in "Veritas Vincit", an elaborate three-part history film by Joe May. In the film, Riemann co-starred alongside May"s wife Mia.

From then on, Riemann became a sought-after actor who between 1919 and 1926 starred in four to ten films a year. In the early 1920s, in particular, he repeatedly worked with director Friedrich Zelnik, for instance, for "Anna Karenina" (1920). But Riemann also starred in films by Lupu Pick, Carl Boese, and Robert Wiene.

In the first half of the 1930s, Riemann also started to write screenplays and to direct films – but without abandoning his acting career. He mainly finished entertainment movies, such as "Ich sehne mich nach dir" ("I"m Longing for You", 1934), "Die große und die kleine Welt" (1935/36), and "Gauner im Frack" (1937).

Neither the advent of the sound film nor the Nazi"s ascension to power did pose a problem to Riemann"s career. Actually, Riemann even stated his sympathy for the Third Reich and in return Adolf Hitler appointed him to the rank of national actor. However, around 1943 he received less and less role offers and he returned to the theatre.

After the end of World War II, Riemann still was not able to tie on to his earlier success on the movie screen. The by then almost 70-year old actor appeared only occasionally on the movie screen – for instance, in Géza von Cziffra"s "Der schräge Otto" (1956) and in the sentimental film "Zwei Bayern im Harem" (1957).