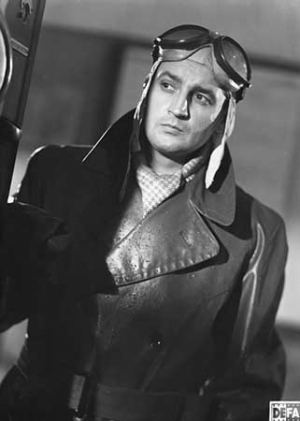 Horst Eckhart Drinda, born May 1, 1927, in Berlin-Wedding, learned to build aeroplane engines at the Junckers plants in Köthen/Dessau. In the fall of 1944, he enrolled at the military college in Gotenhafen to prepare for the career of a technical officer. But already in the January of 1945, Drinda was deployed to the infantry. He got wounded, and was finally taken captive during the fight for Berlin but was able to escape.

Under the artistic director Wolfgang Langhoff, Drinda became one of the most prolific actors of the tradition-rich theatre during the 1950s. He played youthful heroes and later also character roles such as Ferdinand in Goethe"s "Egmont" (1951), Schiller"s "Don Carlos" (1952) or "Hamlet" (1964). But he was also successful in comic roles, for instance as Khlestakov in a 1954 production of Gogol"s "Der Revisor" ("The Government Inspector").

Drinda made his movie debut already in 1948 in "Und wieder 48" but was mainly moonlighting in the movie business. He starred in a series of satirical short films of Stacheltier-Produktion whose director Richard Groschopp also cast him in several feature-length comedies, as well as in the title role of Günter Reisch"s "Der Dieb von San Marengo". In Konrad Wolf"s "Lissy", Drinda delivered an impressive performance as the employee Frohmeyer who tries to accomplish his petty bourgeois dream of advancement in the SA.

However, Drinda played his most important movie part in 1965 as the worker and communist Ernst Machner in Günther Rücker"s film "Die besten Jahre" ("The Best Years"). After returning from the war, Machner becomes a teacher and his ardous rise is a sketch of 15 years of educational politics in the GDR. In "KLK an PTX – Die rote Kapelle" ("KLK Calling PTZ: The Red Orchestra"), Drinda played the resistance fighter Dr. Arvid Harnack.

But Drinda played most of his important roles on TV. From 1967 to 1970, he portrayed the publisher Axel Caesar Springer in a TV series that was important in the ideological conflict with the Federal Republic of Germany. In 1971, Drinda became a cast member of the ensemble of the GDR television and from then on appeared in all major TV productions.

Drinda then became popular with several TV series that portrayed everyday life in the GDR. In the last years of his career, he also played persons of authority in contemporary films – for instance, Weißbecher in "Auf der Suche nach Gatt" based on Erik Neutsch, and Professor Schaffroth in "Anamnese" – and in historic films, for instance the Prussian reform general Gerhard von Scharnhorst in "Scharnhorst", the Bulgarian communist Dimitroff in "Der Teufelskreis", that was also co-directed by Drinda, and Karl Marx in "Das Interview". Drinda also directed several films such as the 1972 TV adaptation of Molière"s "Don Juan". After the end of the GDR Horst Drinda was rarely seen on the screen, he only appeared in some small cameos.