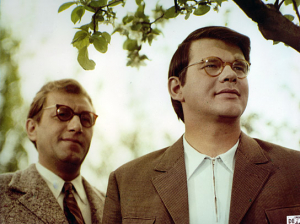 After his return from the Soviet Union at the end of 1932, the lawyer and economy expert Arvid Harnack gives a lecture in Berlin about his experiences, and how they could be useful for the renovation of Germany. When Hitler takes over power in Germany only a few months later, Harnack and a couple of like-minded people form the resistance group "Rote Kapelle" ("Red Band") that becomes one of the most important adversaries of the Nazi regime. Besides Harnack, the group includes the aviation officer Schulze-Boysen, the poet Adam Kickhoff, the Communist editor John Sieg, the worker Schulze and the radio operator Coppi, among others. The movement, which operates according to resolutions by the Communist Party, succeeds in communicating important information about Nazi Germany abroad. But eventually, the Gestapo gets on the track of the resistance group and many of the men are arrested and pay for their courageous resistance against the regime with their lives.