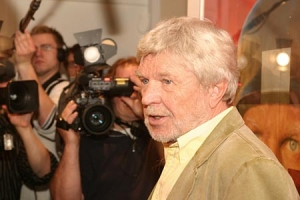 On the occasion of the exhibition "Hardy Krüger - Filmstar Autor Weltenbummler" at the Deutsches Filmmuseum, Frankfurt, April 12, 2005

Eberhard Krüger, born April 12, 1928, in Berlin-Wedding, attended an elite Nazi boarding school from 1941 on where he was cast by Alfred Weidenmann for the film "Junge Adler". After his successful performance as the apprentice Bäumchen, Wolfgang Liebeneiner tried to persuade him to continue his movie career. In 1945, after finishing school, Krüger was drafted but went into war captivity by US troops. After his release from war captivity, Krüger began to write but did not publish his writings. Instead, he started to perform at theatres in Hamburg and Hannover. From 1949 on, he was engaged at theatres in Berlin, Munich, and Stuttgart. In 1949, Krüger made his first post-war movie, "Diese Nacht vergess Ich nie". In the following years Krüger's career took off and he became famous for his roles as a good-looking young man with an effortlessly natural attitude. But the quality of his films did not match his talents at that time.

After "Liane, das Mädchen aus dem Urwald", one of the biggest box office hits of the 1950s, Krüger declined to star in further "Liane" films for "artistic reasons". In 1956/57, Krüger made his international breakthrough when British director Roy Ward Baker cast him for the part of lieutenant Franz von Werra in his ambitious war adventure film "The One That Got Away". This success also identified Krüger for the time being with "positive" roles in regimentals. Furthermore, Kürger worked with renowned directors: He starred in Joseph Losey's "Blind Date" (1959), in the Africa adventure "Hatari!" (1960/61) by Howard Hawks, or in Robert Aldrich's aviator movie "The Flight of the Phoenix". In Stanley Kubrick's "Barry Lyndon" (1973 to 1975), Krüger played the part of the Prussian captain Potzdorf.

Krüger was mainly typecast for roles of friendly soldiers and adventurers during his international career. Krüger did not appear in any German film production until 1971 when he starred in the TV crime movie "Das Messer", based on Francis Durbridge. During that time, he made his sole appearance in a film of the "New German Cinema" in Peter Schamoni's "Potato Fritz" (Montana Trap, 1976).

In his private life and other activities, Krüger also comes across as an urbane and adventuresome cosmopolitan. In 1961, he opened a farm hotel in Tanzania. His literary works are also to large part influenced by his fascination for the African continent. In 1983, after several novels, story collections, and a children"s book he published the novel "Junge Unrast", an only slighty disguised autobiographic account of his life.

From the mid-1960s on, Krüger appeared in less and less films. Instead he got his interest in remote parts of the world and exotic cultures across to the German TV audience in several TV series, including the "Weltenbummler" series. Since his international movie career had taken off, Krüger only sporadically performed on stage. In 1985/86, he and Mario Adorf went on tour with the two-person play "Wiedersehen im Herbst", adapted for the stage by Krüger and directed by Adorf. In the play, Tom Sawyer and Huckleberry Finn meet again as old men.

Krüger received numerous awards in the course of his career, including the Honorary Lifetime Achievement Award at the 1983 German Film Awards and the Honorary Award of the Bavarian Film Awards in 2002. In 2009 he was awarded the Grand Cross of Merit of the Federal Republic of Germany.

For many years, Hardy Krüger and his third wife Anita Park lived alternately in California and in Hamburg. His son Hardy Krüger jr. also became an actor.