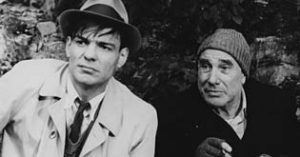 Fabian works in a small advertising agency and specializes in promoting cigarettes. Money and career are of little concern to him. He spends his nights with his best friend in the cafés, clubs and bars of Berlin. He is lucky with women although he seldom has a penny in his pocket.

Fabian falls in love with a girl who knows exactly what she wants. He loses his job. She makes a career in film and leaves him. His friend commits suicide. After a while Fabian leaves Berlin. In his home town he tries to save a boy who has fallen from a bridge while playing. He throws himself into the water and is drowned.