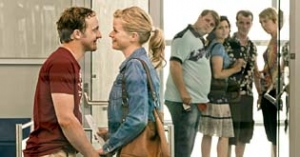 He won′t admit it, but adman Pitschi Greulich is suffering from a severe case of midlife crisis. The upcoming wedding of his best friend is bothering him as well as the fact that his boss doesn′t approve of his allegedly creative pitches anymore. When his long-time girlfriend Sabine talks about having children, he starts to panic, and the very thought of spending the holiday with the same friends in the very same hotel on Mallorca scares him. Acting impulsively, he flees to Argentina – without telling his friends. Once in Buenos Aires, he wants to start over in a posh penthouse and with an attractive local girl at his side. Unfortunately, things turn out quite different in reality, and it doesn′t take long until Pitschi has only one wish: to go home.