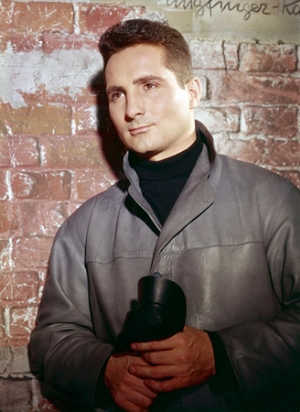 Freddy Quinn (née Franz Eugen Helmuth Manfred Nidl-Pelz) was born on September 27, 1931 in Niederfladnitz, Lower Austria, grew up after the emigration of his father in the USA, later with his mother in Vienna and Antwerp.

As a teenager, Quinn undertook extensive travels that took him through southern Europe and as far as North Africa. During this time he worked as a musician for various circuses, where he also trained as an acrobat and tightrope walker. In bars and clubs in the Algerian city of Sidi bel Abbès, he performed sentimental songs about his homeland and love songs with great success in front of foreign legionnaires. He eventually began his own training with the "Légion étrangère", which he broke off after only three weeks of basic training.

Back in Germany, he was discovered in 1954 through a performance in a bar in Hamburg's St. Pauli district: filmmaker Jürgen Roland and music producer Werner Becker recognized Quinn's talent and placed him with the music company Polydor. Polydor, in turn, enabled him to receive professional vocal training. In the same year, he makes his acting debut with a small role in Alfred Weidenmann's "Canaris".

In 1955, Quinn records his first record for Telefunken, for the first time under the pseudonym "Frederico Quinn". His musical breakthrough comes a year later with the song "Heimweh" (a German version of the U.S. hit "Memories Are Made of This"), which becomes the best-selling song of the year. At this point, the public knew Quinn only as "Freddy," since only his first name was printed on the record - legend has it, because no one at the pressing plant was sure how to spell the name "Quinn" correctly.

After his first major acting role in the romance "Heinweh" (1958), he starred in a series of successful films until the early 1970s, which were entirely tailored to him and his image, and in which his screen characters also always bore the first name "Freddy". Among the most successful contributions to this series are "Freddy, die Gitarre und das Meer" (1958), "Freddy und der Millionär" (1961) and "Freddy, Tiere, Sensationen" (1964).

The main focus of his career was nevertheless in the music business. Between 1956 and 1966, Quinn, who also competed for Germany in the 1956 "Grand Prix Eurovision de la Chanson" (today: Eurovision Song Contest), landed ten number one hits. With a total of over 60 million records sold, he is one of the most successful artists in German music history. In some songs, the pop singer, who lived in the U.S. for a time, addressed surprisingly political themes. For example, the song "Wir" (We), released in 1966, was directed against the burgeoning student protest movement, while the B-side of the same record featured "Für eine Handvoll Reis" (For a Handful of Rice), a song against the Vietnam War. On his last number one hit, "100 Mann und ein Befehl," the German version of Barry Sadler's "The Ballad of the Green Berets," he even goes so far as to turn the original's military song into an anti-war song.

Even as Quinn's music and acting success waned in the 1970s, he was able to celebrate great success as a live performer and TV entertainer in shows such as "Musik aus Studio B" and "Stars in der Manege." In the course of his career, Freddy Quinn received several awards, including the "Otto" readers' prize from the teen magazine "Bravo" six times in a row (1960-1965) and the Federal Cross of Merit I Class of the Federal Republic of Germany in 1984.