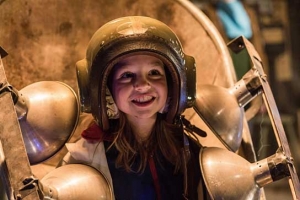 1989, the German Democratic Republic: After he has applied for a transit visa, the uncle of 10-year-old Friederike is ordered by the authorities to leave for the West within 48 hours. The devastated girl thinks that she might never see her favourite uncle Mike again. Therefore, she and some of her friends start working on a machine which ought to "beam" her secretly across the boarder – just like she saw on Western television. Unfortunately, the first test run doesn't yield the results she was hoping for: Friederike and her friends remain where they were, instead all other inhabitants of the village have apparently been "beamed" to the West. And now they are seemingly trying to get over the Wall unnoticed in order to return to their homes. With time running out, the kids have to act quickly if they want to avert a catastrophe at the boarder.