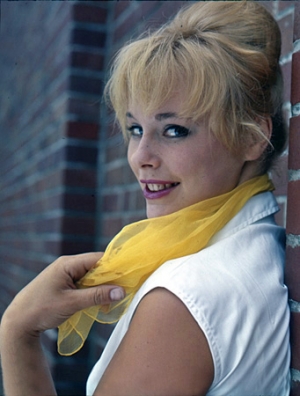 Elke Sommer was born in Berlin on November 5, 1940. After graduating from school, she was an Au-Pair in London and aimed at becoming a translator.

She came to acting by chance: At the age of 16, she went on a holiday in Italy and took part in a beauty contest. Through the media coverage of the contest, she was discovered by producer, actor and director Vittorio de Sica. He invited Sommer to Rome and within on year, he cast her in four films – the start of a career which now spans more than 50 years. When she got back to Germany, she appeared in memorable supporting roles, for instance in Georg Tressler's "Das Totenschiff" (1959), as a gangster moll in Gerd Oswald's crime drama "Am Tag als der Regen kam" (1959), as a seductive Lolita-type in "Das Mädchen und der Staatsanwalt" (1962) and as a feisty cowgirl in the western "Unter Geiern" (1964).

From 1962 on, Elke Sommer mainly appeared in US and international productions, and in 1964, she relocated to the States. For her performance in the spy thriller "The Prize" ("Der Preis", USA 1963), which also starred Paul Newman and Edward G. Robinson, she was awarded the Golden Globe for Best Newcomer. She played the partner of clueless Detective Clouseau (Peter Sellers) in Blake Edwards' "A Shot in the Dark" ("Ein Schuß im Dunkeln", GB 1964), and in Burt Kennedy's film noir "The Money Trap" ("Goldfalle", USA 1965) she portrayed a femme fatale who seduces a police officer – played by Glenn Ford – and coaxes him into committing a crime.

Over the years, she appeared in more than 70 feature films, among them many thrillers and adventure romps with a comic streak. Although very successful, she never made the breakthrough to super-stardom. From the late 1960s on, she mainly starred in – often entertaining and worthwhile – B-pictures, like Phil Karlson's "The Wrecking Crew" ("Rollkommando"), which also featured an aging Dean Martin, or the Italian horror classic "Lisa e il diavolo" ("Der Teuflische", 1974) by Mario Bava. While roles in big-budget productions like "The Prisoner of Zenda" ("Der Gefangene von Zenda", 1979) became more scarce, she enjoyed success as a stage actress. In 1973, she was named Best Stage Actress in Chicago, and she also appeared in a number of popular plays in Germany, some of which she directed herself.

In the 1980s, she had only few television and film appearances, including "Niemand weint für immer" (1984), some episodes of the popular TV series "Love Boat" and the Hungarian-American co-production "Lily in Love" ("Verheiratet mit einem Star", 1984), in which she starred alongside Christopher Plummer and Maggie Smith.

In 1995, she was cast in Peter Zingler's comedy "Alles nur Tarnung"; in 2000, she had a cameo in the German slasher film "Flashback – Mörderische Ferien". Apart from a few guest roles, Elke Sommer mainly focused on her second career as a painter, using the pseudonym "E. Schwartz" for her art. But eventually she returned to the big screen in Dani Levy's "Das Leben ist zu lang" (2010), in which she portrays the dominant mother of a struggling Jewish film director.