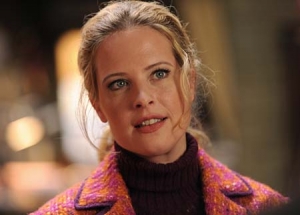 Diana Amft, born in Gütersloh on November 7, 1975, was trained as a legal clerk before she decided to start a career in acting. She took singing classes and applied successfully at Zerboni Schauspielschule in Munich when she was 20. Amft's feature debut was the TV thriller "Unschuldige Biester" for which she was cast in a supporting role playing alongside Mina Tander in 1999. Further appearances in TV productions were to follow until, in 2001, she had her break-through in the comedy "Mädchen, Mädchen" ("Girls on Top"), her first true cinema feature film.

In the following years, she could be seen in guest roles of various TV series like "Das Traumschiff", "Ein Fall für zwei", or "SOKO 5113" as well as in feature films like teen comedy "Knallharte Jungs" ("More Ants in the Pants", 2002), Marco Kreuzpaintner's adolescence drama "Ganz und gar" (2003) and "Mädchen Mädchen 2 – Loft oder Liebe" ("Girls on Top 2", 2004). After acting in a supporting role in "D'Artagnan et les trois mousquetaires" (2005), the French remake of "The Three Musketeers", Amft focussed entirely on TV, with great success: In 2008 she played the name part of comedy series "Maja". The same year, she was cast in the series "Doctor's Diary – Männer sind die beste Medizin" where she remains the lead until today. It was this role as Dr. Margarethe Haase that earned her both the Grimme Preis and the Bayerischer Fernsehpreis in 2009. The TV series itself was awarded the German Comedy Award in 2008.

After five years of TV productions only, Diana Amft returned to the big screen in 2010. In the children's movie "Teufelskicker" ("Devil's Kickers") she featured as a young street soccer player's mother. More TV productions were to follow: She starred in Hajo Gies's crime picture "Der Bulle und das Landei" (2010) alongside Uwe Ochsenknecht, as well as in the sequel subtitled "Babyblues" in 2011. The following year, she was cast as the lead for another theatrical release: In the comedy "Frisch gepresst" ("Freshly Squeezed"), based on a best selling novel, she represents a career woman who rejects the idea of having kids but suddenly finds herself pregnant.