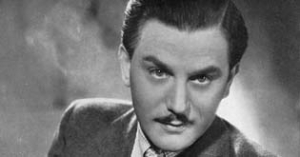 Adolf Wilhelm Anton Wohlbrück was born November 19, 1896, in Vienna as the son of the Hamburg-born circus clown Adolf Wohlbrück II and his Austrian wife Gisela Rosa Cohn. His great-great-grandfather Gottfried Wohlbrück (born in 1770) had already been working as an actor. Wohlbrück attended a Catholic convent school near Vienna and a high school in Berlin. After finishing high school, he attended actor’s training at Max Reinhardt’s drama school. Reinhardt then signed him to a five-year contract at Deutsches Theater.

During World War I, Wohlbrück served as lieutenant at Gardegrenadier-Regiment No. 1. He then was captured by the French army and set up a theatre group in war captivity called "Auricher Gefangenschaftstheater" where he recited Rilke’s "Cornet", among other texts.

With the help of Hermine Körner, he landed a role in a production of "Die Kameliendame" by Alexandre Dumas at Munich’s Schauspielhaus after the end of the war. He then performed at Otto Falckenberg’s Kammerspiele in Munich before he went to Dresden from 1927 to 1930 where he performed at Staatstheater and at Dresdner Komödie. He then moved on to Düsseldorf and finally in 1930 to Berlin.

Wohlbrück played his first role in a movie in 1915 in "Marionetten". During the mid-1920s, he starred in several films of the Stuart Webbs detective series but did not appear regularly on the movie screen until 1931. He made his national as well as international breakthrough in Willi Forst’s film "Maskerade" ("Masquerade"). After the film, he signed a lucrative deal with Ufa.

Wohlbrück left Germany in 1936 during the Olympic Games in Berlin. After shooting one film each in France and in the USA, he settled in England where he worked under the name Anton Walbrook. Furthermore, he supported Jewish actors and their families in Germany from London. In 1947, he became a British citizen.

Wohlbrück already received a lot of recognition for his very first role in England as the prince consort in the film "Victoria the Great". Directed by Michael Powell with whom he collaborated four times and by Emeric Pressburger, he played the ballet impresario who is obsessed by his work in "The Red Shoes". Furthermore, Wohlbrück starred as the master of ceremonies who links the episodes of the round of love with his gently ironic comments in "La Ronde", directed by Max Ophuels.

In 1951, Gustaf Gründgens signed Wohlbrück for his first post-war theatre performance in Germany at Düsseldorf’s Schauspielhaus. There, he performed in productions of Curt Goetz’s plays "Towarisch" and "Dr. med. Hiob Prätorius". Wohlbrück subsequently performed in Stuttgart, in Hamburg, and at Berlin Renaissance-Theater.

German post-war cinema, though, had virtually no roles for Adolf Wohlbrück. The sophisticated flair originating from his Viennese elegance that he had embodied before the war in "Maskerade" as a "glamorous, rather shady painter who knew how to put on a scarf in a perfectly accomplished way" (Jeremias, 1967), as Johann Strauß in "Walzerkrieg" ("Battle of the Walzes"), or as "London’s most coveted bachelor" in "Viktor und Viktoria" ("Viktor and Viktoria"), had no place in a film business that was dominated by stuffy, provincial post-war films like "Grün ist die Heide".

"When Adolf Wohlbrück perfomed on stage or in a film scene, all his gestures and all of his cautiously spoken lines (and he never spoke in anything but in a cautious way) were lessons in the high art of sophisticated boulevard theatre. In his portrayal, the characters of this sphere – no matter how different the roles were – presented themselves in an appreciatively cultivated and fast-living weariness that was part of their noblesse." (Henseleit, 1967).

In late March of 1967, Adolf Wohlbrück collapsed during a performance of Noel Coward’s play "A Song at Twilight" at Munich’s Kleine Komödie. On August 9, 1967, Wohlbrück died from the consequences of a heart attack in Garatshausen near Lake Starnberg. He was laid to rest in England.