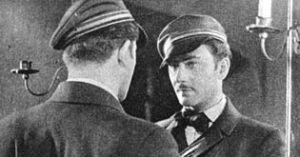 The Student of Prague

Second remake of the classic 1913 film: Prague during the 1880s. Balduin has fallen in love with Julia but the poor student and the opera diva are worlds apart. All this changes when the mysterious Dr. Carpis, a former lover of Julia, takes away Balduin’s mirror image. In a game, Balduin divests Count Waldis, one of Julia’s suitors, of his wealth. When the Count challenges him to a duel, Julia asks Balduin to spare the life of his adversary. But his jealousy, incited by Dr. Carpis, and his mirror image that is wandering around put Balduin in such a rage that he kills Count Waldis in the duel. To finally end his dread, Balduin shoots his mirror image and thus fatally wounds himself.